CANCER | The Problem with the Mutation Theory – Part 1 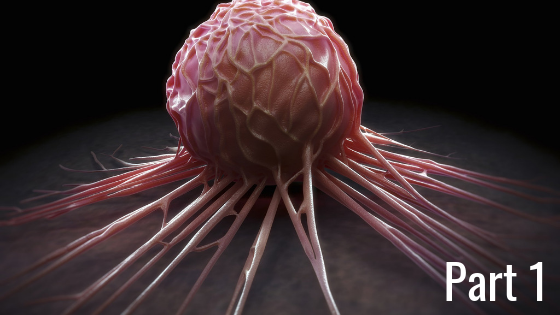 Despite billions of dollars being poured, year on year, into cancer research worldwide, more lives are being lost to cancer than ever before. In 2018, there were and 12.5 million new cases of cancer worldwide. Cancer is the second leading cause of death globally and was responsible for an estimated 9.6 million deaths in 2018; compared to 8.9 million in 2016.

Lung, liver, stomach, and bowel cancers are the four most common causes of cancer death; and this has remained true since 1975. Infection‐associated cancers, including cervix, stomach, and liver are disproportionally prevalent in emerging economies. In contrast, cancers in higher-income countries are strongly associated with lifestyle factors such as smoking, poor diet, obesity, and alcohol intake.

The statistics are depressing. The level of funding for cancer research does not appear commensurate with cancer outcomes. Cancer patients continue to suffer and die at unacceptable rates. In 2013, this beast took my mother’s life. Since then, my quest to discover the origins and mechanism of cancer has become all-consuming. I refuse to believe that we have lost the war. I prefer to submit that we’ve simply failed to understand the enemy.

The art of war is to subdue the enemy without fighting.

Perhaps, like type 2 diabetes and heart disease, we have got our understanding of cancer completely wrong. In type 2 diabetes, we have been ‘treating’ the blood sugar, instead of treating the rising insulin levels and consequent insulin resistance. In heart disease, we have been blaming cholesterol and saturated fat, rather than focusing on what causes the injury to the blood vessels in the first place.

All metabolic diseases are on the rise. The rate of rise in middle and lower income countries is even faster than in high-income countries. Cancer rates are rising just as fast. It seems at least probable that it could be a metabolic disease. In fact, many cancers are now included under the umbrella of the ‘Metabolic Syndrome’.

The prevailing understanding of cancer is that it is a genetic disease. This is termed the Somatic Mutation Theory (SMT), which theorizes that a cell develops mutations (mistakes) that allow it to become cancerous. The SMT premise is that cancer is derived from a single cell that has accumulated multiple random DNA mutations, leading to cell proliferation.

This theory birthed an increasingly complicated profile of cancer, with hundreds of ‘problem’ genes being identified. We now, therefore, think of cancer as a terribly complicated disease; and in so doing, we accept invasive and devastating treatments as an inescapable price to pay. This and many more interventions are performed to accommodate this complexity.

There are approximately ten trillion cells in the human body. Throughout life, these cells are assailed with radiation, oxidative damage, viruses and more. Individuals’ own genetic susceptibility, damage from cigarette smoke, lack of physical activity, obesity and aging itself can cause many oncogenes (genes that have the potential to cause cancer) to get activated and many tumour suppressor genes to be inactivated. Yet, according to the prevailing SMT dogma, these cells should lose control and become autonomous. But this does not seem to play out. We do not develop as many cancers as would be expected from the number of harmful mutations. Why is this?

In any case, the SMT paradigm has come to be accepted as self-evident in mainstream medicine. This has led to expensive gene-based research, including identification of genetic mutations, gene editing and development of gene-based therapies. There is an entire industry that has mushroomed from genomic science – an expensive, labour-intensive industry. This would be acceptable, and, in fact, welcomed, were it not for the fact that, across the board, we are losing the war against cancer.

We are still treating people with toxic, life-threatening chemotherapy medication. Medication that does not spare healthy cells. All cells suffer, cancerous or not. And the patient suffers. Their hair falls off and ulcers form throughout their gastrointestinal tract, causing painful mouth ulcers, profuse diarrhoea, malabsorption, and everything in between. And this is before infections take hold.

The Current Standard of Care

We are still significantly compromising quality of life, for the sake of a few extra months of life. We are resigned to the idea that the torture the patients go through is in their best interests, and that there is no possible alternative. We have developed robust protocols to treat the host of side-effects that we anticipate. High-dose chemotherapy protocols damage the healthy bone marrow, rendering the patient anaemic, neutropenic (at risk of infections), and thrombocytopenic (at risk of bleeding).  Doctors barely blink when a cancer sufferer requires blood products to stay alive; because this is the ‘new normal’.

We expose patients to radiation, in an attempt to shrink tumours, the treatment of which is a well-recognised carcinogen. By the time most cancer patients start their treatment, they have already been exposed to huge doses of radiation. This comes from multiple X-rays, CT scans, CT guided-biopsies and PET scans that have been done, in an attempt to diagnose the condition. Radiotherapy, which is often required, only adds to this insult.

A carcinogen is a substance capable of causing cancer in living tissue.

Apart from the terrible side-effects of most chemotherapy regimens, we prescribe a host of other ‘supportive medications’, such as steroids. These increase the risk of infections, raise blood glucose and perpetuate insulin resistance. We also, quite often, give low dose antibiotics and antivirals, to protect against opportunistic infections that could kill the very person we are trying to save with the said chemotherapy. Antibiotics, chemotherapy, and radiotherapy are well known to disrupt the gut microbiome, which we are now recognising as a crucial contributor to overall health, with unhealthy gut microbiota being linked to everything from allergies, diabetes and, believe it or not, cancer.

Cancer cases are now at epidemic levels. It is almost certainly a 21st Century plague that is maiming and killing people at a shockingly rapid rate. ‘Cure’ is often not discussed, particularly with adult malignancies. Your best bet is to be ‘in remission’, which means that the doctors can no longer detect cancer in your body (with the technology available). You are sent home with 6-monthly follow-ups arranged. To look for cancer regrowth, oncologists must perform a CT scan. This means more radiation exposure, on a 6-monthly or yearly schedule, until remission is attained, or the cancer recurs – which it often does, as in my mother’s case.

Exactly 5 years after her initial diagnosis, her cancer was back and more aggressive the second time around. She had unrivalled access to world-class doctors and the latest treatments. Nothing worked. 4 months later, she was gone.

Science evolves by being challenged, not by being followed. We can continue to dive deeper into the ‘gene hypothesis’, even in the face of abysmal rates of death, or we can change our hypothesis. This means throwing out our current understanding of cancer and starting again. In science, when observations do not fit your hypothesis, it is the hypothesis that needs to change, not the facts. The fact is that there are thousands of genes in a cell, and thousands of mutations (mistakes) can occur. One, or a cluster of genetic mutations can be linked to a certain type of cancer, such as the faulty BRCA1 gene (linked to breast and ovarian cancer). However, having these mutations does not necessarily mean you will develop cancer. Other mutations can also be linked to the very same cancer.

In my article, ‘Causality’, I discuss the concept of cause and effect, as it relates to the medical field. Causality is difficult to prove. However, it can be disproven quite easily. This is where the notions of necessity and sufficiency come in.

Let me explain. If it is said that mutation A causes cancer B, in order to disprove the hypothesis, one must find people with cancer B who do not have mutation A. This is the concept of ‘necessary’ – that the factor is ‘necessary’ to prove causality. As an example, the BRCA1 mutation is neither necessary nor sufficient, to cause breast cancer. The majority of people with breast cancer do not have this genetic mutation. In addition, having the faulty gene does not guarantee you will get breast cancer.

To establish causation, we would need to subject the faulty gene to the Bradford Hill criteria. If the strength of association is double, the other eight criteria are worth looking at for potential causation and not just association.

Sometimes the gene theory works very well. AMPL is a type of cancer of the white blood cells. Scientists discovered that this cancer is linked to a problem with the Retinoic Acid Receptor alpha (RARA) gene. The targeted therapy that was developed is called ATRA (All-Trans Retinoic Acid), and APML responds very well to this treatment. This treatment has revolutionised the management of this disease, which was once considered an acute, fatal illness. We now have very high, 10-year survival rates.

But that’s only part of the story. ATRA alone is not enough for many sufferers of AMPL. Many patients who are at risk of recurrence of this disease also need to be treated with chemotherapy and other toxic drugs. The adverse effects of these drugs cannot be underestimated, with many patients dying after succumbing to overwhelming infections, or organ failure, as a direct result of these treatments.

Another example is Chronic Myeloid Leukaemia (CML). Glivec (Imatinib) is the world’s most-often prescribed drug for this cancer. It revolutionised the treatment of this disease by targeting the molecular cause of CML. Glivec prolongs progression-free survival in most patients. The BCR-ABL fusion gene that is ‘responsible’ for this cancer is found in most patients with CML. However, it is also found in some patients with other types of acute leukaemia.

I have recently learned that Glivec does not alter the cancer cells’ DNA. It works by altering the growth signalling pathways causing glycolytic suppression and increased autophagy. I will be exploring this, in some detail, later in this article.

Glivec is likely an exceptional case. CML is caused by a single faulty fusion gene. This is unlike most other cancers, which are caused by a multitude of complex interacting genetic and environmental factors, and therefore have many potential targets. Having a single target makes it easier to develop successful treatments. Having multiple targets is a nightmare scenario when it comes to therapeutics.

A genetic approach seems, to me, like a needle-in-the-haystack approach.

So, it’s not to say that genomic research is completely useless in oncology. That would be a ridiculous position, as it very clearly has its role. Gene mutations have been identified as the cause of several non-cancer disorders including sickle cell anaemia, cystic fibrosis, Huntington disease, and haemophilia. These can result from single, multiple, or combined gene mutations, and environmental factors; or by chromosome mutation or damage.

However, let’s take a step back and observe the whole cancer landscape. Recall that humans have thousands of genes (20,000-25,000), which can be damaged in thousands of different combinations. These mutations may or may not be ‘switched on’ by a particular environmental exposure, and this may or may not lead to cancer. You can see why a genetic approach seems like a needle-in-the-haystack approach. It is a laborious, expensive, overwhelming methodology. This might explain why so little progress has happened in cancer biology in recent decades.

In Part 2, I discuss a new way of thinking about cancer – The Metabolic Theory.