CANCER | Could Cancer be a Metabolic Disease? – Part 2 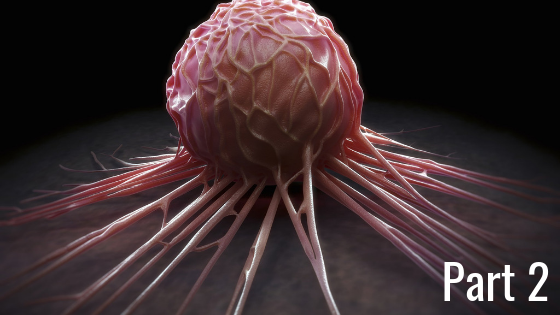 As discussed in Part 1, many cancers are now included as part of the metabolic syndrome, a cluster of diseases/disorders whose unifying hallmark is insulin resistance. As well as the well-recognised culprits – type 2 diabetes, heart disease, fatty liver disease, and strokes, there are others, such as osteoarthritis, tinnitus, Alzheimer’s dementia, and cancers, that are being brought into the fold.

These diseases all appear to be increasing in frequency. It does not take rocket science to at least hypothesise that they could all have a unifying root cause. But this requires ”first principles” thinking, as popularised by Aristotle, the ancient Greek philosopher and scientist. Aristotle believed that everything could be divided into categories and sub-categories. The smallest sub-category in any domain is what we would call a first principle.

To understand disease, we must first seek to understand the root causes of the disease (the smallest sub-category). It is of no use to anyone, except, of course, those with vested financial interests, to treat the symptoms of a disease, rather than the root cause.

Could cancer, like diabetes, be a symptom of metabolic impairment?

Type 2 diabetes is the most common type of diabetes. In this disease, insulin fails to lower the blood sugar. Consequently, the patient has high blood sugar readings. However, a normal blood sugar reading does not exclude type 2 diabetes. Diabetes does not develop overnight. It is a slowly evolving disease that takes many years to manifest as high blood sugar. Early on, the rising blood sugars are kept in check by the available insulin (an energy storage hormone). As the disease progresses, the body must produce more and more insulin to keep the sugars in check. When these compensatory mechanisms fail, years later, the blood sugar rises in spite of high insulin levels. This is when you are ‘diagnosed’ with diabetes. In other words, by the time the sugars are too high, it’s already too late.

It is, therefore, highly probable that type 2 diabetes is grossly under-diagnosed. If we understand the mechanisms and the progression of this disease, why do we wait until the final stage to make a diagnosis and start treatment? A good doctor would not ignore a worsening fever and cough that precede a chest infection. So why do we ignore the rising baseline insulin levels that occur early on in occult (hidden) diabetes?

Considering that diabetes is the number one modifiable cause of heart disease – the biggest killer on earth, would it not make more sense to measure insulin, rather than glucose, to enable clinicians to make the diagnosis as early as possible? It seems obvious, doesn’t it? So, why is this allowed to happen? Is it that glucose testing is simply cheaper and more widely available? Or is this a case of cognitive dissonance, with a worrying lack of understanding that it is, in fact, the persistently high insulin (and subsequent insulin resistance) that is the problem, and that the high glucose is just a symptom?

Yet, we continue to prescribe glucose-lowering drugs (that only move glucose around the body), and injectable insulin; as well as advising diabetics to eat glucose-containing foods (carbohydrates). We are unwittingly treating the disease with its cause. We then wonder why these patients continue to get fatter and sicker.

This brings me nicely back to cancer. As clinicians, what we are doing with cancer is not working for the vast majority of people. We applaud ourselves with good 5-year survival rates, all the while unable to escape the reality of the utter devastation that mainstream cancer therapeutics is having on our patients. Change is in order, if not overdue. A fresh approach. A new paradigm. Anything, but the status quo.

What if all cancers have a unifying denominator, one that can be targeted to treat all cancers? What if we stopped thinking of cancer as a genetic disease, and started thinking about it as a metabolic disease? It is clear that we observe random mutations in cancer cells. The question is why. Why do these mutations occur? What is ultimately responsible for this observation? In addition, how certain are we that tumours arise from DNA mutations and that some of these mutations drive the disease?

Cancer cells continue to grow and replicate uncontrollably, normal cells do not.

The most important observation about cancer is that cancer cells continue to grow and replicate uncontrollably, while normal cells do not. Normal growth is regulated by genes. Genes that accelerate growth and genes that decrease growth. A mutation in either can disrupt the balance, and lead to excessive growth. Cancer cells are able to grow and replicate unchecked, they do not die and they often move from one place to another (metastasise). They are able to evade being destroyed by the immune system, which works overtime identifying and killing anything that could cause us harm. Cancer cells also have the ability to become resistant to multiple different drugs. This is due, among other mechanisms, to increased transport of drugs out of the cancer cell.

A Positron Emission Tomography (PET) scan is an imaging test that helps doctors make a diagnosis. The scan uses a special dye containing radioactive tracers. A CT (Computed Tomography) scan can be performed in conjunction with a PET scan (CT-PET) to create a three-dimensional image. This provides more information and allows for a more precise diagnosis.

PET scanning with the tracer fluorine-18 (F-18) fluorodeoxyglucose (FDG), called FDG-PET, is widely used in clinical oncology. FDG is an analogue of glucose, i.e., it has a very similar structure to glucose. We know that cancer cells grow and divide rapidly and need massive amounts of glucose, whereas most normal cells take up glucose at a relatively low basal rate. The tagged glucose cells (fluorine-18 FDG) are injected into the bloodstream and accumulate in the cancerous tissues. Cancer cells have a much higher metabolic rate than non-cancerous cells. For this reason, cancer cells show up as bright spots on PET scans, therefore being very useful to check if the cancer has spread or to see if the cancer treatment is working. 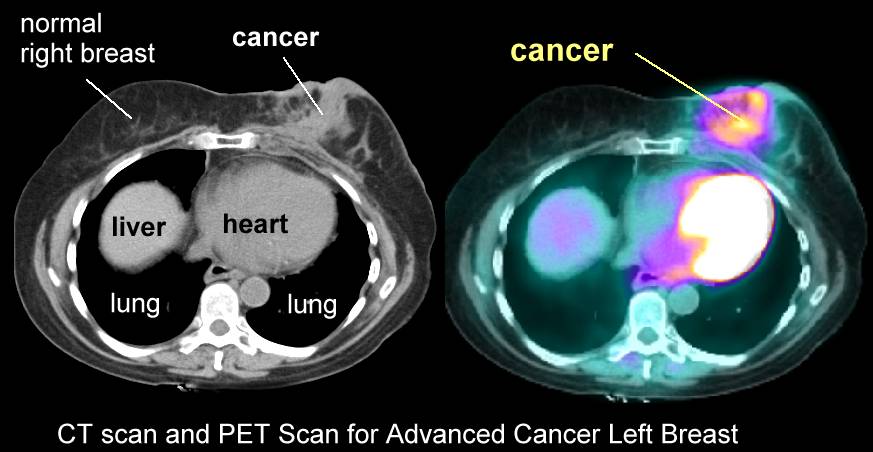 The PET technique was invented in the 1950s and further developed in the 1970s. We have known, for many decades, that cancer cells ‘ate’ glucose at a faster rate than normal cells.

There is a new school of thought that is capitalising on this established knowledge. The knowledge that cancer cells consume large amounts of glucose. We know that just like normal cells, all cancer cells must ‘eat’ to grow. Knowing this, can we starve cancer?

Mitochondria are small structures of the cell that generate energy. Think of them as little batteries in a cell. These work non-stop to provide energy for the body. It has been demonstrated that all cancer cells have poorly functioning mitochondria. They use an energy generation pathway that works without the use of oxygen (anaerobic glycolysis), rather than the normal pathway that uses oxygen (oxidative phosphorylation). For each molecule of glucose, the former process generates only 2 molecules of energy (ATP), while the latter, 36 ATP. ATP is the molecule that carries energy in a cell.

In simple terms, unhealthy mitochondria do not ‘breathe’ properly.

This shift from respiration to fermentation is a common metabolic hallmark of cancer cells. Almost every cancer cell does this. You might be wondering why cancer cells would select such an inefficient pathway for generating energy when there is a more efficient one available. Why do cancer cells select a pathway that provides 18 times less energy (ATP)? 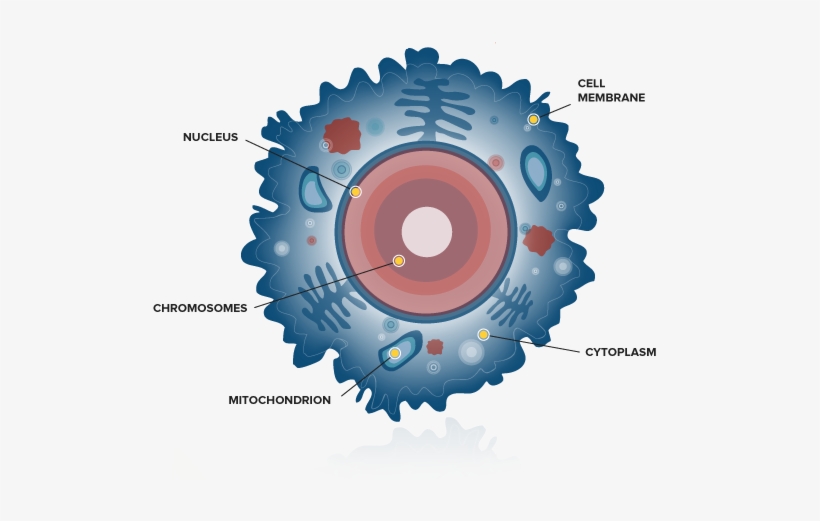 It is not that the cancer cell won’t use this pathway, rather that it can’t use this pathway, in spite of plenty of available oxygen. This must be (and is) due to damage to the mitochondria. If these little batteries are damaged or old, then cells will naturally look for other pathways to generate energy. It is also recognised that while energy generation is important, so is the synthesis of other molecules that form the building blocks of the cancer cell. This too is a requirement for successful growth and replication.

Abnormal mitochondrial structure and function are the hallmarks of ageing and age-related degenerative diseases. Mitochondrial disease seems to be linked to many of the diseases of excessive growth, including Alzheimer’s disease and cancer.

Anaerobic glycolysis explains why cancer cells need a massive amount of glucose (20 times that of normal cells) to keep up with the energy demand. This compensatory mechanism is known as the Warburg Effect and is present in most cancers. Anaerobic glycolysis also underlines the basis of the PET scan, as discussed earlier.

Otto Warburg was the 1931 winner of the Nobel Prize in Physiology. He studied the energy metabolism of normal cells and cancer cells.

Otto Warburg wrote, “Summarized in a few words, the prime cause of cancer is the replacement of the respiration of oxygen in normal body cells by a fermentation of sugar.”

We’ve discussed that DNA mutations alone cannot explain the origin of cancer. Do we have any evidence that damaged mitochondria can encourage cancer development, or even, that healthy mitochondria can suppress cancer? Yes, we do!

This is a game changer and strengthens the hypothesis that cancer is, indeed, a mitochondrial metabolic disease.

In Part 3, I discuss the most important risk factors related to cancer.