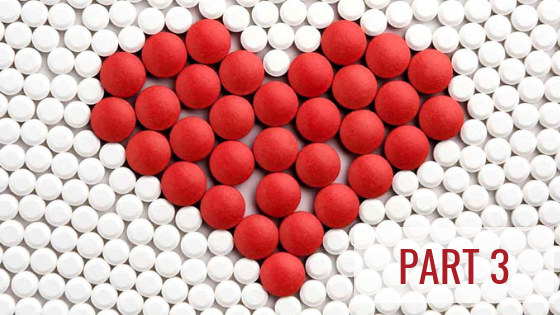 Part 3 of this series on heart health describes how the fear of cholesterol has been propagated and capitalized by drug manufacturers.

I recently discovered that no trial has ever proven that dietary reduction of LDL yields consistent cardiovascular benefit, despite the apparent sustained benefits from LDL lowering that have been found in trials on drugs (statins). However, delve deeper and you will discover that while statins ‘effectively’ lower cholesterol levels, this does not significantly reduce the risk of events or death. Allow me to share with you how these apparent benefits are ‘created.’

The darling drugs of pharma. Lipitor (atorvastatin) is the most profitable drug in the history of medicine. Sales are expected to reach 1 trillion dollars in 2020. What more and more clinicians are discovering, is that these wonder drugs that are being pushed relentlessly into our medicine cabinets are nowhere as effective as the claims may state. Their side effects have also been seriously underplayed.

Statins are designed to block the ability of our cells to make cholesterol. Cholesterol, as discussed in my earlier blog, is essential to life and is involved in multiple important functions. It maintains the cell membrane and makes up a large part of our brain matter. Most of the cholesterol we need is made in the liver. It is used in large quantities for building and repairing cells throughout life. Hormones and vitamin D are synthesised from cholesterol, as are bile acids, which are important in digestion.

Statins have been widely recommended for 2 populations:

These are people who have never had a cardiovascular event, such as a heart attack or a stroke. This group accounts for 75% of all people who take a statin. The evidence supporting this? None. There was no reduction in mortality observed in this population. You will not live a single day longer. Yet, the vast majority are on statins for this reason.

The now infamous JUPITER Study (an industry-funded study) was celebrated as a blockbuster study. The excitement rippled across cardiology circles. ‘’We finally have strong data that a statin prevents a first heart attack’’ said one researcher.

JUPITER was looking at the effect of a statin on healthy people with high CRP levels. This was based on the understanding that increased levels of the inflammatory biomarker – high-sensitivity C-reactive protein (CRP), predicts cardiovascular events.

They reported an impressive 44% relative risk reduction. If we look a little closer, JUPITER was terminated after a median follow-up of 1.9 years. The study was stopped on an ethical basis, because, apparently, so many people were being saved. The absolute risk, however, was minuscule. The difference between the drug and placebo was only 1.2% – not nearly as impressive. However, as far as the researches were concerned, statins should be taken by everybody for primary prevention, and they might as well be introduced into the drinking water supply.

In order to justify this extreme position, data had to be distorted and cholesterol vilified.

This miscarriage of science did not go unnoticed. The researchers were widely criticised. Here is one of many published rebuttals relating to the JUPITER trial.

This meta-analysis of 11 Randomised Controlled Trials (gold standard), looked at statins and all-cause mortality. It concluded that there was absolutely no benefit from taking a statin for primary prevention. The study concluded ‘’this literature-based meta-analysis did not find evidence for the benefit of statin therapy on all-cause mortality in a high-risk primary prevention set up’’.

Remember that the majority of people have been prescribed statins to prevent the first cardiovascular event, such as a heart attack. As for secondary prevention, the mortality benefit is trivial. In other words, you will not live longer taking a statin.

These are people who have had at least one previous cardiovascular event. The statin is taken to prevent another event.

In the ASCOT-LLA Trial (an industry-funded study), Lipitor (atorvastatin) was claimed to reduce the risk of CVD by 36%. This seems impressive, doesn’t it? But if you look closer at the study (table 4), it shows that if you take a placebo-pill, your risk of having a heart attack is 3.1%. This risk drops to 2.0% if you take a statin. This is approximately a 36% relative risk reduction (1.1/3.1), but the absolute risk reduction was only 1.1%! Far less impressive.

The reporting of relative risk is confusing and misleading, yet unacceptably prevalent in clinical trial reporting. This is the effect that propelled Lipitor to generate billions of dollars in revenue. The real revelation of this trial was that the NNT (number needed to treat) for 1 person to benefit (one less heart attack) from taking Lipitor, is 100. In other words, statins are not effective in 99% of people who take them.

It actually says so in the small print of this typical Lipitor promotional advert! These people know exactly what they are doing when they promote relative (rather than absolute) risk. 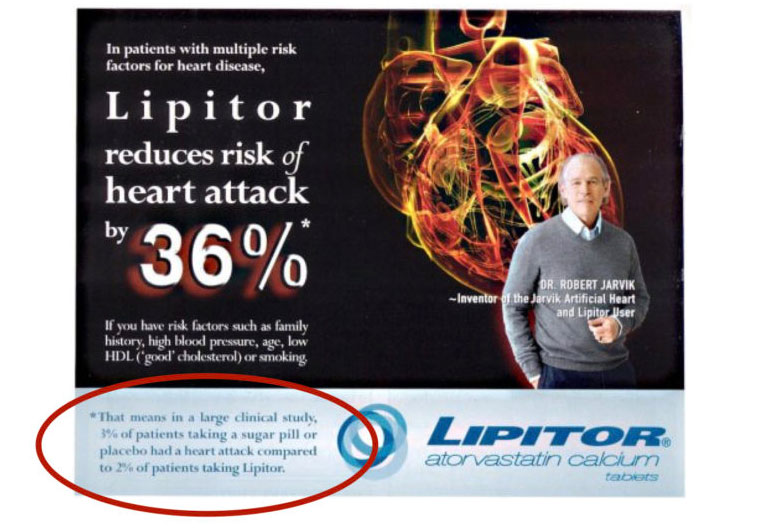 At best, when all statin studies are analysed, the NNT (number needed to treat) to prevent death is still at 83 for 5 years, i.e, 1 out of 83 will avoid death.

Relative risk is useless and only acts to amplify the absolute risk.

The drug manufacturers use relative risk to shamelessly overstate the benefits of a drug. In my opinion, this misrepresentation of science to physicians and to the public stands as organised crime. It’s not just mathematical semantics, it is much more sinister. Many people, doctors included, will not have the skills or time to scrutinise the studies, and will, therefore, accept the relative risk reporting as ‘truth’.

When it comes to drug prescription, three major criteria must be met. Is it effective? Is it safe? Is it affordable?

Is the 1% risk reduction better than nothing? No, in my opinion. Does the tiny anti-inflammatory benefit of statins outweigh the associated side effects? I submit that it does not.

The systematic underreporting of statin adverse drug reactions (ADRs) makes it difficult to accurately assessing the harm caused by statins. Experts estimate that 18% of statin users report ADRs and at least 20% stop taking statins because of decreased quality of life. I have come across hundreds of patients who did exactly that and never bothered to inform their GP.

There are numerous side effects related to statins. Numerous. The adverse effects begin very gradually over months to years. By the time the patient has recognised them as problematic, so much time has passed, that there is often no connection made to the statin, and therefore a new ‘disease’ is diagnosed.

These side effects have been downplayed, despite being widely published in the peer-reviewed medical literature. Lipitor’s own patient information leaflet lists many of them. Remember that cholesterol is an utterly vital nutrient with a multitude of roles in the body. Most of us are aware of the problems with muscle pain and weakness, but there are many more. Kidney disease occurs because of muscle atrophy. Lowering cholesterol means lowering the sex hormones such a testosterone, causing erectile dysfunction. Cataracts, liver dysfunction, cancer, and many other diseases can develop.

Statins work by blocking an enzyme that helps make cholesterol. This important biochemical pathway is blocked high up in the manufacturing chain. This pathway makes other important molecules, not just cholesterol. By blocking the pathway, the production of Co-enzyme Q10 can be reduced by as much as 40-50%.

Co-enzyme Q10 is an important enzyme that is involved in generating energy in the cells. It is found in very high concentrations in those organs with the highest energy requirement, such as the heart, liver, and kidneys. Statins reduce the synthesis of this important compound, and this has been linked to an increased risk of heart muscle failure. This is sometimes referred to as statin-induced cardiomyopathy.

What really grates me is how sales of co-enzyme Q10 supplements have skyrocketed. It’s a real case of the blind leading the blind.

This analysis shows that the NNT (number needed to treat) to cause diabetes is 50. This means that 1 in 50 people taking a statin for 5 years will develop diabetes.

The real reason the JUPITER study was discontinued at 1.9 years, of the planned 4 years, is because people developed Type 2 diabetes. This important adverse effect has been published extensively, yet downplayed by industry.

This is one of many problems with pharma-funded studies. They abruptly stop a study when unfavorable outcomes start to creep in. This is unacceptable, particularly in the JUPITER trial, as the proposed intervention was to be promoted for long-term use. So, they are encouraging us to prescribe a lifelong drug, for a new indication (primary prevention), without any evidence of long-term benefit.

He who pays the piper calls the tune.

In another study, published in Diabetologia in 2015, HbA1C measurements were taken prior to participants starting the study, and they were followed up for 6 years. In this study, statin treatment increased the risk of type 2 diabetes by 46%, and this was attributable to decreases in insulin sensitivity and insulin secretion. Considering diabetes is the biggest modifiable risk factor in the development of CVD, this is obviously going to offset any potential benefits from taking a statin.

My conclusion is that statins certainly do not lead to a longer life, proven by the absence of any report to the contrary.

Continue to the concluding part of this heart health series, where I  describe the real causes of heart disease.