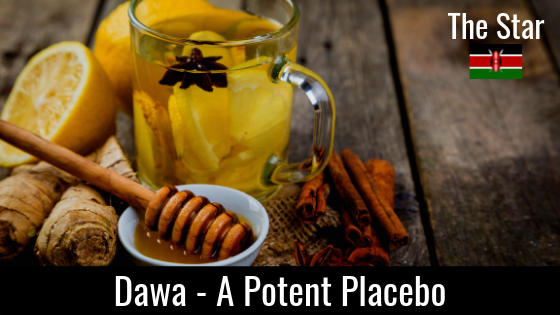 Dawa is one of the most popular hot drinks in Kenya. It literally means ‘medicine’ in Kiswahili, and is considered by many a magic potion. Most Kenyans swear by Dawa’s ability to soothe coughs and colds.

In spite of the paucity of supportive clinical evidence, most people feel much better after taking Dawa. The placebo effect can explain this – people who think they are doing something effective can report a favourable result, even when none exists.

Let’s look at vitamin C, specifically. I will explore honey, in detail, in another article. Vitamin C is known to support the immune system and it’s rapidly depleted during an infection. Some studies have suggested that vitamin C supplementation may speed up your recovery. Others found it to be no more effective than placebo at shortening the duration of cold symptoms.

Linus Pauling, Ph.D., a two-time recipient of the Nobel Prize, was one of the most recognisable researchers involved in the early studies. He popularised the theory that vitamin C is helpful in treating colds. He recommended mega-doses of vitamin C for a wide variety of ailments, from the common cold to heart disease and cancer. His results were often inconclusive, with studies showing benefits being countered with studies that showed no benefit.

Scientific fact is established when the same experiment is carried out over and over again with the same results. This is the concept of reproducibility, and it is considered central to the integrity of science.

Humans are unable to synthesise (make) vitamin C. It must, therefore, be obtained from the diet. Inadequate dietary intake results in Scurvy, a potentially fatal disease. As little as 10 mg/day of vitamin C is sufficient to prevent overt scurvy, which is roughly the amount found in the juice of half a lemon. Special groups, such as smokers, or those on dialysis as a result of kidney failure, require considerably more.

Glucose and vitamin C are closely related and have similar chemical structures. For this reason, they compete for entry into cells. This is an important observation because too much glucose in the bloodstream inhibits (prevents) the transport of vitamin C into cells, including the white blood cells that help us fight infections.

In light of this competition, it follows that the higher your dietary carbohydrate (glucose) intake, the higher your vitamin C requirements. The reverse must also be true. If you consume less glucose, you utilise vitamin C more efficiently and therefore require much less of it.

Could this inhibitory effect by glucose on the actions of vitamin C explain the inconsistencies in benefit of vitamin C administration in many of Dr Pauling’s studies? The researchers may have been unaware of this competition, and few if any such studies controlled for dietary carbohydrates.

The highest concentrations of vitamin C comes from foods with the lowest glycaemic index.

Fruits and vegetables such as managu, sukuma wiki, kunde, terere, oranges, and lemons are the principal sources of vitamin C. However, we know that domestic animals, including ruminants, can make vitamin C in their livers. We can, therefore, derive most of the vitamin C we need from meat and liver, provided the diet is low in carbohydrates. This explains why communities that eat meat exclusively have no reported cases of Scurvy.

This brings us nicely back to Dawa. There is nothing in Dawa that is innately harmful. However, there is nothing in Dawa that is particularly helpful in preventing the common cold. There is no cure for the common cold. The vitamin C in Dawa, at best, may shorten the duration of your cold, or it’s severity. In addition, in light of its competition with glucose, perhaps you should consider avoiding honey in your Dawa, to give your body a better chance of utilising the vitamin C from the lemons?

This piece was published in The Star, Kenya, in print and online on 12th August 2019.