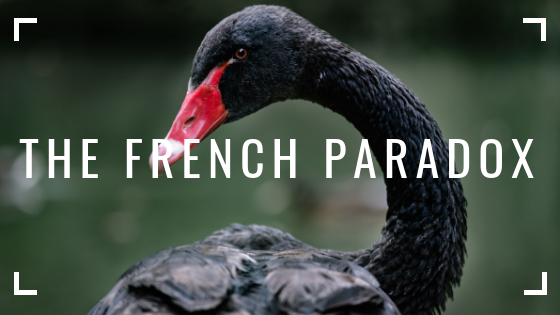 The French have the highest consumption of animal fat in Europe, and/yet the lowest rate of heart disease. The ‘French Paradox’ is the catchphrase that summarises this ‘paradoxial’ observation. They cook with lashings of butter, lard, goose fat and double cream, while enjoying fatty cuts of meat.

But how can this be? Is the garlic protective? Or perhaps the red wine? What of the Ukrainians who currently have the lowest saturated fat intake in Europe, yet the highest rate of heart disease. Is this too a Ukrainian Paradox? The nutrition police repeatedly tell us that saturated fat is dangerous because it raises blood cholesterol, which can lead to heart disease. They produce a litany of ‘evidence’ to support this story.

When it comes to the French Paradox, this inconvenient, yet reproducible observation, is often ascribed to the Black Swan theory. This describes an event that comes as a surprise, has a major effect, and is often inappropriately rationalised after the fact, with the benefit of hindsight. Multiple good quality studies found that animal fat (mainly saturated fat) does indeed raise cholesterol. However, they also found that those who ate animal fat had a low risk of heart disease. In fact, in this particular study, the most significant dietary correlate of low cardiovascular risk was high total fat and animal protein consumption.

Recall that cholesterol is only found in animal products. Dietary cholesterol was recently exonerated as a ‘nutrient of concern’. It is now considered safe to eat. If raised cholesterol levels are translating to positive outcomes, then wouldn’t it follow that saturated fat should be similarly white-listed?

Could it be that the French Paradox is not so much a paradox as it is a contradiction? Could it not actually reflect the fact that saturated fat is not only good for us, but protects us from heart disease?

I know what I think. What do you think?

Please take a look at my four-part cholesterol series – a deep dive into our obsession with cholesterol.