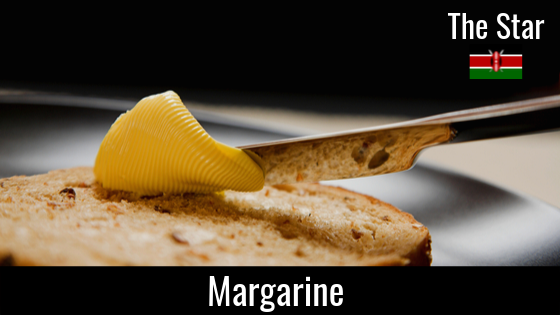 Not many brands in Kenya are as recognisable as one particular margarine brand. Once seen as a preserve for the wealthy, these popular spreads have recently been repackaged into tiny sachets, and sold at a price even the poorest can afford.

But margarine sales are falling and manufacturers are getting desperate. As hydrogenation continues to be outlawed in many countries, the ‘anti-butter movement’ has had to become more inventive.

Margarine is now claimed to ‘lower cholesterol’, to be ‘heart healthy’ and to be ‘lower calorie than butter’. Vitamins have been added to boost sales. Millions of dollars are spent trying to make margarine look, feel and taste just like butter.

Little is told about the extra-ordinary processes involved in creating margarine. Here’s a question. Why do food manufacturers spend so much money and energy making a ‘butter-like’ product when butter already exists, and in all its deliciousness does no harm?

Margarine was invented in France in 1869 in response to Napoleon the Third’s quest to find a cheaper substitute for butter. The war troops needed it as a stable source of energy. Butter was expensive and spoiled quickly. Margarine was originally manufactured from fresh beef tallow (beef fat), and then subsequently from vegetable oils; but not until the 20th century, when the technology to extract oil from seeds became widely available.

Margarine sales peaked in the 1980s, coinciding with the vilification of saturated fat as the cause of heart disease.

The shameful series of events that led to the demonization of natural fat has all the ingredients that guarantee a Hollywood blockbuster – greed, power and lies.

Nutrition studies that formed the basis of international dietary recommendations were fraught with controversy from the moment of their inception. In the early 1950s, following U.S. President Eisenhower’s heart attack, dietary cholesterol was hypothesised as the cause of heart disease. Having spent a decade unable to link cholesterol to heart disease, the researchers turned their attention to saturated fat. They concluded that saturated fat found in milk and meat was dangerous, while unsaturated fat found in vegetable oils was beneficial.

The ensuing dietary recommendations were designed in the belief that dietary fat generally, and saturated fat especially, caused heart disease. The rest is history. Butter was out. Margarine was in.

Little is told about the extra-ordinary operations involved to create margarine. This complex process starts with the extraction of oil from seeds, often using solvents. The oil is then refined using neutralisation, bleaching, and deodorization. It is then hardened through a variety of methods such as hydrogenation or fractionation.

Hydrogenation is a process of using heat and pressure to add hydrogen molecules to liquid oils. This gives margarine a harder consistency and extends its shelf life. Hydrogenation also turns some of the vegetable oils into trans-fats, which resemble saturated fat, but is distinctly different from natural, healthy saturated fat.

The one thing that all nutritionists agree on is that foods containing artificial trans-fats are absolutely the worst foods you could eat. Trans-fats increase the risk of heart disease by promoting inflammation. They are downright dangerous, and rather than being minimised, they should be avoided altogether.

In many countries, there’s a legal requirement for margarine manufacturers to add vitamins to their recipes. This has certainly bolstered their ‘healthy’ propaganda. Many brands now have added vitamins, omega 3’s and plant sterols (which claim to lower cholesterol). Others have added olive oil, riding on the back of the increasingly popular Mediterranean Diet.

A typical butter’s nutrition label lists the following ingredients: Butter and Salt. Which would you rather choose?

Corn oil, sunflower oil, and canola oil are often found in processed foods, such as margarine, salad dressings, and biscuits. Sugar, vegetable oils, salt, and refined flour make up the vast majority of processed foods. These ingredients are incredibly cheap, tasty and long-lasting – a goldmine for food manufacturers.

The take-home message is simple. Eat real food. Enjoy butter. Avoid margarine like the plague. The addition of vitamins to margarine is nothing short of a pervasive marketing tactic. Margarine is garbage. Adding vitamins to garbage does not change this fact.

This article was published by The Star Kenya, online and in print on 7th October 2019.