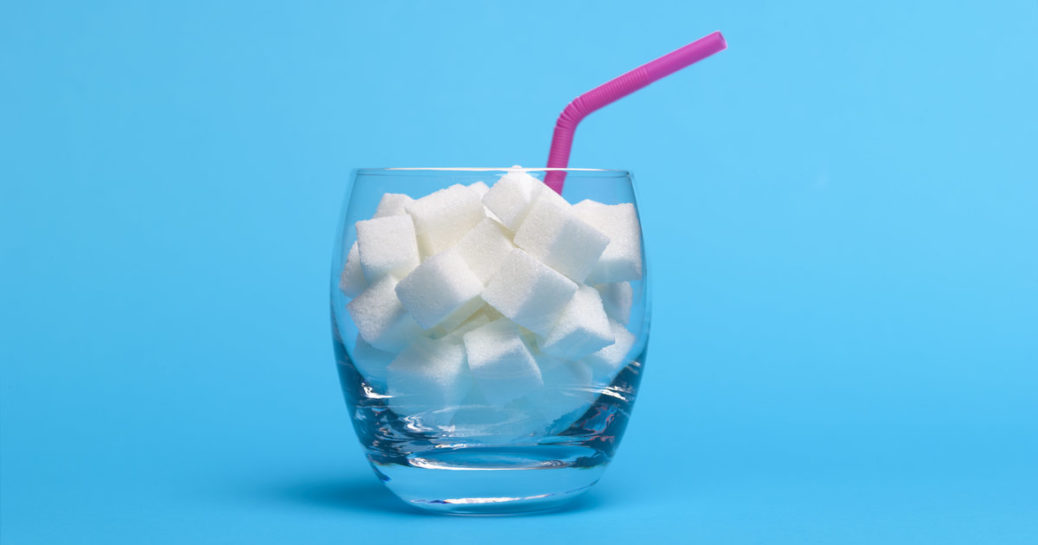 After years of campaigning, the ‘groundbreaking’ sugar tax on soft drinks has finally started. Soft drink manufacturers will have to pay a levy on the sugary drinks they sell. The tax burden lays squarely on them. Whether or not they pass this extra cost on to retailers and consumers is up to them. They almost certainly will – these are ‘for profit’ companies after all.

Plans to introduce the sugar tax were announced by the former Chancellor, George Osborne, in his March 2016 budget. This was met with fierce opposition from an army of campaigners, including Big Food. They cited an economic fallout, following potential job losses, as well as a lack of evidence that it would make an appreciable dent in the obesity crisis. Proponents of the tax argued strongly that there would be an impact on soft drink intake because consumers would respond negatively to the price hike.

‘Groundbreaking’? No. No need for hyperbole. Groundbreaking would be taxing every single processed food that contains more than a teaspoon of sugar per serving. Groundbreaking would be ensuring that natural fat, that was stripped from our food and replaced with sugar and additives, be brought back by law. Ground-breaking would mean that a packet of Haribo sweets would now cost £20. Yes, £20. By comparison, a can of non-diet soda will now cost us an extra 10p. 20p at most. Not ground-breaking by my standards, but surely better than nothing and almost certainly a step in the right direction.

Many critics claim that this is a result of a ‘Nanny State’. Nonsense. Walk into any acute NHS Hospital and observe how chronic metabolic disease is crippling our health service. Observe the lives and limbs that are lost to diabetes. The amount of sugar and highly processed carbohydrates we are consuming as a nation, has significantly contributed to an explosion of lifestyle diseases, that have already brought our health service to its knees. Diabetes, high blood pressure, heart disease, strokes, fatty liver disease, many cancers, and fertility problems are what us doctors are treating now. On an hourly basis. Lifestyle diseases. Diseases of modernity.

Talk of a ‘Big Brother’ state is selfish and immature. You can no longer have your cake and eat it – literally and figuratively speaking. We are already sicker and fatter than we have ever been. That ship sailed a long time ago. We need to be thinking about reversing these diseases, by addressing the root causes – our diet and lifestyles.

You may or may not notice the resultant price increase of your preferred soft drink. It will cost a few pence more, perhaps 10-20p more. The collective revenue, forecast to be circa £240 million pounds in 2018-2019, is less than half of what the Treasury was expecting. This is because the manufacturers found ways to slash the amount of sugar in many of their products, so as to avoid paying the tax.

Industry responded as they always do – beat them or join them. There must have been intense lobbying to delay or stop the implementation of the new tax. There were countless attempts to downplay the role of sugar in causing disease – by discrediting active anti-sugar campaign groups. The tax pushed ahead regardless. By early 2018, half of the manufacturers had slashed the sugar content of several of their biggest brands. Some increased their prices, while others opted to reduce the size of the bottles, to limit the price rise.

In Scotland, Irn Bru –  a soft drink that has achieved near cult status, has had its sugar content cut by more than half – from 7 teaspoons of sugar per 330ml can, to just 3 teaspoons, despite huge consumer backlash. The ‘’Hands off our Irn Bru’’ petition attracted over 6000 signatures, with fans stockpiling the soft drink, ahead of the planned change in the recipe. It is worth noting that Scottish children have among the poorest health in Western Europe. Lucozade, Ribena, and Fanta are also among the ‘victims’. Supermarkets have also reformulated their own-brand sweetened drinks, so as to come in below the threshold for the levy.

Doing it for the Children

The sugar tax was pushed forward following concerns about the number of sugary drinks that our children, teenagers, in particular, are consuming. This was done primarily to benefit their health, with the revenue generated being channeled toward school sports programmes and breakfast clubs.

There is no doubt that sugary drinks are the worst offenders when it comes to unhealthy food. They overload the body with an enormous amount of readily available sugar, that we are unable to process safely. These liquid sugar bombs wreak havoc on our weight-regulating hormones, fattening our internal organs first, then the rest of us –  if consumed frequently enough. The risk of developing Type 2 diabetes is 26% higher if you consume one or more sugary drinks each day. Recall that the World Health Organisation (WHO) recommends no more than 6 teaspoons of added sugar a day, to prevent disease. A single can of cola contains 30g of sugar (7 teaspoons). This war has already been lost, long before it’s even started. 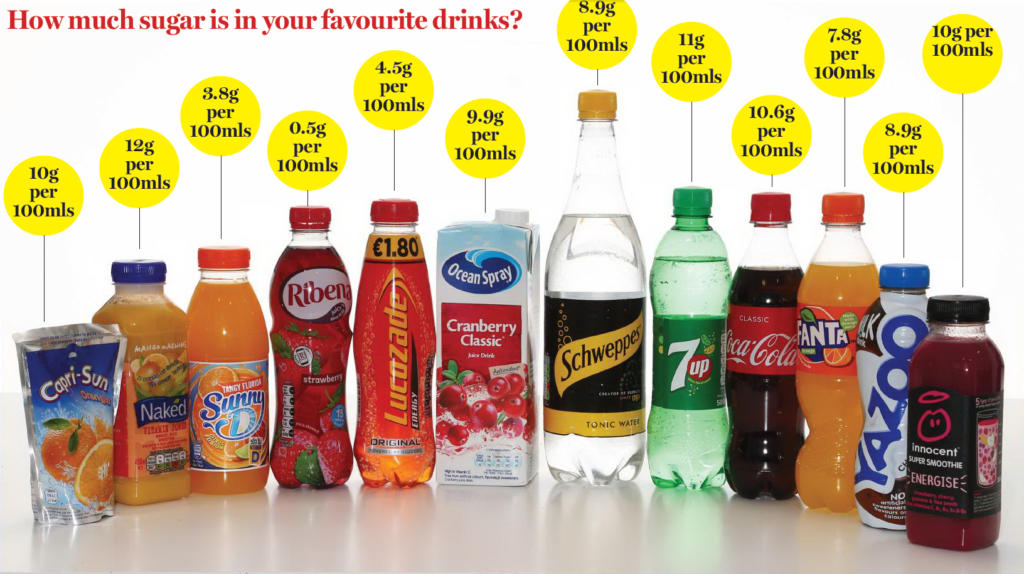 It is interesting to note that pure fruit juices and drinks that contain a high amount of milk will be exempt from the levy.

Pure fruit juices do not contain added sugar, but they certainly contain sugar. Fructose is sugar. Glucose is sugar. Once you squeeze the life out of apples to make apple juice, you end up with a concentrated sugar bomb. Below is an extract from my scathing article on the rising trend of juicing.

Your body does not care where the sugar comes from. Following digestion, the sugar from cola and the sugar from apple juice will be metabolised identically and have the EXACT same (harmful) effect on your body. Harmful, because our bodies have not adapted fast enough to cope with our current sugar-loaded food environment.

Chocolate (and other flavoured) milk was exempt from the sugar tax, ‘due to its calcium and protein content’.

This is a typical example of a popular chocolate milk drink. It contains 40g of sugar per serving (400mls). 40 grams! That’s almost 10 teaspoons of sugar in one hit! What genius concluded that this was a safer choice? It is as bad, if not worse, than any other soda drink. How is it better? For calcium and protein? They have got to be kidding. Is this how our children are being advised to source their nutrition? Have a piece of cheese instead! This level of ignorance from ‘the top’ frustrates me to no end. Processed food giants have won – again.

As a fervent anti-sugar campaigner, I must accept any good news, even if it’s only crumbs of good news. This sugar tax on soft drinks is a good move. It may make a difference, it may not. It is too early to tell. Mexico, Norway, and France have introduced similar taxes. There is no evidence, yet, that this has led to a reduction in Obesity. That is going to take much more than taxes.

Punitive taxation is seen by many to be nothing but a government money-grab that does nothing to address the root causes of social issues. A vote-losing money-grab, to be precise.

Our entire food environment needs overhauling. Most of our food is laced with sugar and unhealthy additives. Cakes, chocolates, and sweets are not included under this sugar tax umbrella, yet they are ubiquitous in our kids’ diets. Our government wants the revenue generated to be channeled towards school breakfast clubs and sports activities. Strategies to halt childhood obesity by increasing physical activity have failed both at home and abroad. Many school breakfast clubs are sponsored by big industry players, who now control the highly processed sugary cereals that are offered to our children. Who is being looked after here? Them or us?

Our leaders have made this move. But they can do so much more, to make a real dent. In a world ruled by profit and greed, even at the expense of our children’s health, what will it take to make the health of a nation a priority?