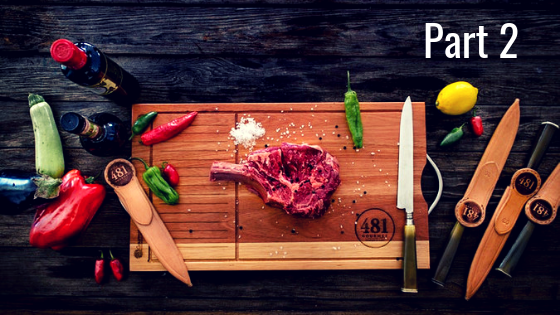 In Part 2 of this series, I argue that the length of our colon (large intestine) reflects an adaptation to a predominantly carnivorous diet, but that we have thrived as a species by being opportunistic omnivores.

Compared to other primates, humans have the shortest colon (large intestine).

The colon extracts water from solid waste before it’s eliminated from the body. It is the only part of the digestive tract in which bacterial fermentation of unabsorbed material occurs. Unlike the small intestine, the colon does not play a major role in the absorption of foods and nutrients.

There are around 100 trillion microbes in the human colon, consisting of over 700 species of bacteria, fungi, and protozoa. The microbiome diversity varies by geography and diet.

This mass of mostly symbiotic microbes has recently been called the latest human organ to be ‘discovered’ – the ‘forgotten organ’. 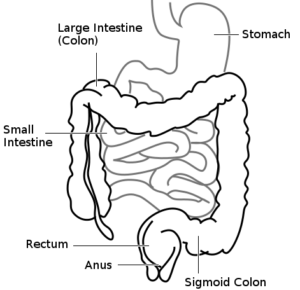 The large intestine absorbs some of the products formed by these symbiotic bacteria. Undigested polysaccharides (fiber) are metabolised to short-chain fatty acids (SCFA -such as butyric acid) by a process called fermentation in the colon and absorbed into the body by passive diffusion, to be used as energy. 1g of fiber can yield about 2 calories of fat. This is not a significant energy source for humans, but it is for herbivores, who derive 70% to 80% of their calories from these short-chain fatty acids. It is worth noting that all SCFA are 100% saturated. Therefore, intriguingly, a gorillas diet consists of a significant percentage of saturated fats – they are on a very high-fat diet!

These bacteria also produce vitamin K and vitamin B7 (biotin). This source of vitamins provides only a small part of the daily requirement. However, it makes a significant contribution when dietary vitamin intake is low.

So, are modern-day humans carnivores, herbivores or omnivores? I would say that we are opportunistic omnivores. Our large intestine (colon) is about 1.5 meters long, which is about one-fifth of the whole length of the GI tract. Our colon is ~20% of total human gut volume, whereas it is over 50% for chimpanzees (who are primarily frugivores).

Humans have the same general digestive structure as apes; a stomach, a small intestine, a caecum, appendix, and a colon. 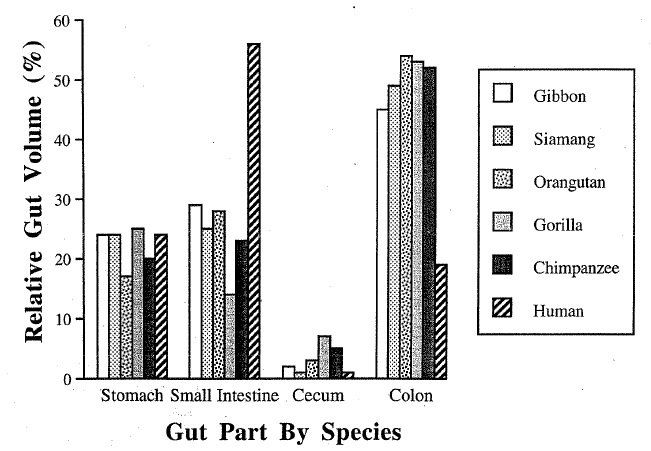 Gorillas have much bigger colon than humans do. They, like the other primates listed, are omnivorous frugivores, mainly eating a low-quality, high-fiber diet. In fact, three-quarters of a gorillas diet is vegetable fiber. A longer colon is, therefore, necessary to allow fermentation of the fibrous fruits, stems, and leaves, in order to release the nutrients in the diet. Most of the edible part of a plant is cellulose, a polysaccharide. Cellulose is an important structural component of the cell wall of green plants.

A polysaccharide is a carbohydrate (e.g. starch, cellulose, or glycogen) whose molecules consist of a number of sugar molecules bonded together.

In human nutrition, cellulose is a non-digestible constituent of insoluble dietary fiber which is very difficult to break down. Ruminants and termites can break down cellulose. As discussed in Part 1, ruminants, such as cattle and sheep, have complex stomach structures that are perfectly adapted for this process. These animals have a whole army of microbes in their colon that digest cellulose and convert it into an energy source (SCFA). In other words, the fiber is digested into fat, that the animal uses for energy.

Humans can digest some forms of fiber, but much of it passes straight through us without delivering any nutritional value. The size of our colons preclude the sheer numbers of bacteria that would be required to effectively ferment high volume fibrous foods.

Humans are resilient opportunistic omnivores that have survived and thrived by adapting to whatever the environment had to offer – we made food of it all. One could argue that we are, in fact, primarily carnivores, in view of the evidence that I have presented above – just as gorillas are primarily herbivores.

What is undisputed is the fact that humans must have some form of concentrated (high quality) nutrition in order to thrive. An important distinction should be made between what we can eat versus what we should eat. We are adapted to process foods that need the least amount of energy to digest, so as to optimise the assimilation of nutrients.

If you are a proponent of the Expensive Tissue Hypothesis, as I am, you will appreciate that this (and the smaller gut that ensued) was a major driver in growing our larger brains.

Digestibility refers to the proportion of food that becomes available to the body as absorbed nutrients. This is often confused with transit times of food through the GI tract, which varies considerably among individuals and the composition of the food. Red meat, like beef and lamb, is highly digestible. In fact, 95% of beef is digestible, in comparison to 65% of most vegetables. Beef and other protein foods remain in the stomach longer than fruits, which is why we feel fuller for longer. But this has nothing to do with digestibility. Meat does not, therefore, ‘sit and rot’ in the stomach, as many would have you believe.

If I were to be semantic for a minute, the word ‘rot’ is defined as decomposition by the action of bacteria and fungi. I could argue that if anything is rotting in our bodies, it is the highly indigestible vegetable matter. But I’m mature and I’ll leave it there.

The stomach co-ordinates mechanical and chemical actions to break down solid foods into particles of 1 to 2 mm size, before being emptied into the small intestine. On average, 50% of stomach contents empty within 2.5 to 3 hours, with total emptying of the stomach taking 4 to 5 hours.

In Part 3 of this series, I discuss the nutritional inferiority of vegan diets. Many micronutrients are inadequately catered for with vegan diets.