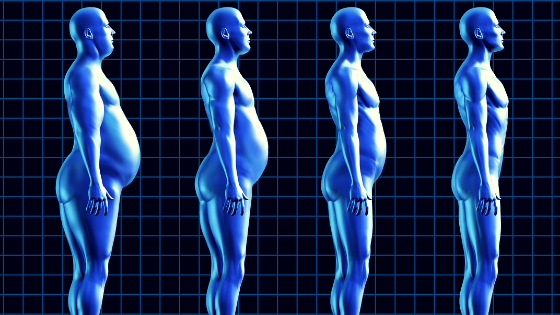 If everybody is on a calorie-controlled diet, why are we getting fatter?

The ‘eat less and move more’ advice has been around for more than 40 years. Yet, we have never been fatter or sicker. This flawed advice is based on the calorie theory. And it doesn’t work. It never has.

Calories are units of energy. A calorie is the amount of heat energy required to raise the temperature of 1 gram of water by 1 degree Celsius, at a pressure of one atmosphere. It is estimated that, per gram, carbohydrate has 4 calories, protein 4 calories, and fat 9 calories. The fact that fat is twice as calorific as carbs explains the (incorrect) ‘logic’ behind the low-fat campaign.

The Laws of Thermodynamics

The belief is that you can burn off however many calories you put in; i.e ”energy in = energy out”. The claim is that this formula stems from the first law of thermodynamics. This, however, is a huge oversimplification. There is no law of physics that claims energy in = energy out.

The 1st law of thermodynamics states that ‘in a closed system, in thermal equilibrium, energy can neither be created nor destroyed; it shall be conserved’.

Here’s the issue. The human body is not a closed system. We are losing heat all the time. We excrete, we sweat and we cry. Calorie theorists have failed to take into account the 2nd law of thermodynamics – the law of entropy. This states that energy will be lost and energy will be used up to make available energy (paraphrased). This law has been misunderstood and is often insufficiently appreciated.

The second law of thermodynamics is a dissipation law.  It says that in any irreversible process, the entropy must increase and balance is not expected. No machine is completely efficient, and this applies to living (irreversible) systems. Entropy is a thermodynamic property. It is the measure of a system’s thermal energy per unit temperature that is unavailable for doing useful work.

“A calorie is a calorie” violates the second law of thermodynamics.

Taking both laws into account, it stands to reason that not all the energy we take in will fuel the energy that goes out. There will be a deficit. And biology (biochemistry) takes center stage in explaining this deficit.

The Thermic Effect of Food

The thermic effect of food, expressed as percentage of their energy content, is 2-3% for fats, 6-8% for carbohydrates and 25-30% for proteins. This means that the efficiency of nutrient utilisation is higher for fat than for carbohydrate or protein.

Let’s take the lower end of these values to help us understand this point. If you eat 100 calories of a banana, 94 calories will be available to the body to use up as energy. Here, very little energy is used up in making energy for the body. However, if you eat a piece of steak containing the same amount of energy, only 75 calories will be available to the body. By opting for the steak, one already has a 20% metabolic advantage.

It is not about how much you eat, rather what you eat.

In the context of weight loss, this inefficiency is clearly desirable, and the metabolic advantage of low carbohydrate/high protein diets is now well-recognised. These diets can lead to greater weight loss than isocaloric low-fat diets. It is, therefore, not simply a matter of total calories, it is also a matter of macronutrient proportions 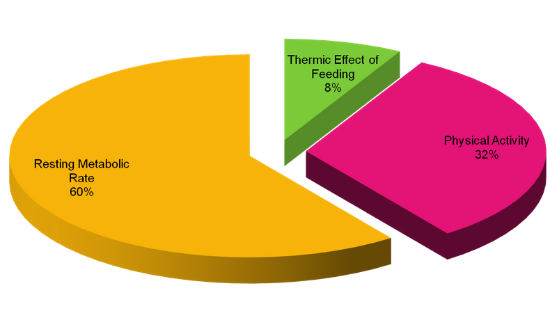 DIT is described as the thermic effect of food and is the increase in EE above Basal Metabolic Rate (BMR) after a meal. It ranges between 3-10% of total EE (depending on the macro-nutrient composition of the meal).

A calorie is only physically a calorie until it enters the human body. It is then, biologically, no longer just a calorie. The body handles carbohydrates, protein, and fats very differently. Weight gain is a hormonal imbalance, not a caloric imbalance. Insulin is the major hormone that drives weight gain, and it controls energy distribution. In the presence of lots of refined carbs, high levels of insulin will make the body store more energy as fat.

Insulin will also, importantly, prevent fat from leaving the fat cells to be used for energy. This is one of the reasons why people on high carbohydrate diets are constantly hungry, despite having plenty of stored energy.

It is Biology, rather than Physics, that will help us to understand the human body.

Losing weight is hard. It is often said that the best way to lose weight is to not gain weight. Weight gain is a gradual process, over many months or years. To make matters worse, the heavier one is, the easier it is to gain more weight. Why? Because biochemistry determines behaviour. The incessant misapplication of the calorie theory is related to a very poor understanding of this important fact.

As well as being insulin resistant, many overweight and obese people are leptin resistant. Leptin is a hormone secreted by fat cells. As you eat, it tells your brain that you have consumed enough energy and you can now move around and start expending it. With leptin resistance, signals indicating fullness reach the brain, but the brain no longer recognises them. The obese person will keep eating and will lack the desire for spontaneous movement.

It’s about What you Eat, not How Much you Eat

The sooner we understand this and universally abandon the failed calorie theory, the sooner we can start making a dent to the current obesity crisis. It is imperative that we advise people to eat real food – that which is free from refined carbohydrates, highly processed food, and sugar. It is not about how much we eat. It is about what we eat.

Consumption of highly processed food has exploded worldwide and it is often devoid of fiber. Humans have not had time to adapt to the massive amount of low-fiber carbohydrates recently introduced to our diet. This is important, because fiber reduces the rate of intestinal carbohydrate absorption, thereby reducing the glucose and insulin spikes. Fiber is like an antidote to the carbohydrate.

A properly fed body will neither choose to store fat to excess nor make you hungry all the time. It will regulate consumption for you. Perpetuating the calorie dogma, in essence, shifts responsibility for weight control to the individual. This is not fair. It takes willpower to overeat if you’re on a real food diet, but it takes even more willpower to not overeat if you are on the wrong diet. The quality of our food matters a great deal.

Most of the big players in the food industry advertise their fake food with the slogan ‘to be enjoyed as part of a healthy diet and lifestyle’. This pervasive marketing tactic shoulders the responsibility on the consumer and essentially blames them for any weight gain. The fact is that we simply do not have enough hours in a day to outrun a poor diet. They know this. And now, we know this. Knowledge is power. We will no longer fall prey to their tactics.