5-a-Day will not stop Cancer 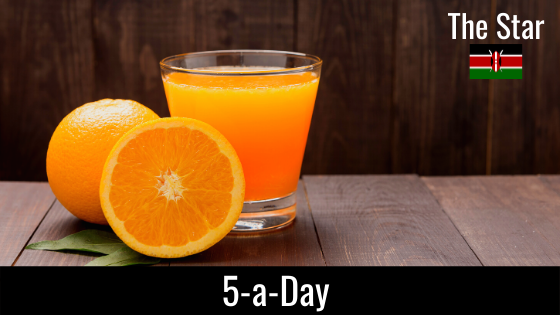 This may come a shock to some, but the ‘5-a-Day’ advice is nothing more than a nutrition marketing campaign.

This mantra is yet another generational ‘truth’ that has been propagated, unchallenged, for decades. So deeply entrenched is this advice that few have taken on the challenge of identifying its origins or examining the evidence that birthed this recommendation.

Fruit and Veg – Not Nutritionally Equal

For starters, fruit and vegetables should not be lumped together, because they are not nutritionally equivalent. Fruits are sweeter and, therefore, more often consumed. This is not helpful for the increasing number of people who are carbohydrate sensitive (insulin resistant) and for whom fruit and high-carbohydrate vegetables are best avoided.

In 1990, the World Health Organisation published a report that recommended no less than 5 portions of fruit and veg a day. This guidance was supported by the National Cancer Institute and promoted by the Produce for Better Health Foundation, a U.S based collaboration of fruit and veg producers, packagers and distributors.

5-a Day is not based on scientific evidence.

In other words, 5-a-Day was conjured up by a coalition of interested parties and launched with no scientific evidence whatsoever. It could just as easily have been 2, 4, or 11 a-day; but 5 was felt to be more achievable. Vested interests aside, there is no doubt that it was set up with good intentions. But there is no evidence that it is improving our health. There is even less evidence that it offers us protection against cancer.

The cancer link has been studied for over 30 years, but no protective effects have been firmly established. The European Prospective Investigation into Cancer and Nutrition (EPIC) is a large study that was designed to investigate the relationships between diet, lifestyle and disease, including cancer. It sought to examine correlations (associations) between fruit and veg intake and the risk of cancer.

A positive association was noted for oesophageal and lung cancer with high fruit intake but not with high veg intake. For colorectal, breast and prostate cancer, there was little to no association between fruit and vegetable intake and reduced risk. Nutrition studies are fraught with methodological flaws, as I discussed in a recent article. They cannot, and do not, seek to establish cause and effect. In this case, they were looking for strong positive associations, which they could not find.

This review of just under half a million people, found that eating five portions of fruit and vegetables a day had very little effect on cancer risk. It concluded that the evidence is still not convincing.

In other words, 5-a-Day will not stop cancer.

It is worth noting that fruit and vegetables are not nutritionally equal. The 5-a-Day recommendation suggests they are. Vegetables, particularly the dark green or purple varieties are nutritionally superior, providing good concentrations of vitamins, minerals, and insoluble fiber. Fruit, particularly tropical fruit, is packed with glucose and fructose – a uniquely fattening combination, if consumed in excess.

There is this assumption that fruit sugar is somehow healthier than table sugar. Admittedly, unlike table sugar which has no nutritional value whatsoever, fruits do contain a limited number of vitamins and minerals – yes, limited. We tend to overestimate the nutrition benefit of most fruits. As an example, we mainly think of fruit as being high in vitamin C. 100g of broccoli contains approximately 90mg of vitamin C, whereas 100g of apples contains only 5mg of vitamin C.

In other words, the vitamin C content of broccoli is 18 times that of an apple.

The glucose in the fruit will raise blood glucose levels and stimulate insulin release from the pancreas. Some glucose will be stored in the liver and muscle, and the excess converted to and stored as fat, within and around organs and muscle. The fructose in the fruit has little impact on blood glucose levels. It is transported directly to the liver – the only organ that can process it – which converts any excess fructose into fat. Unchecked, this progresses over time, resulting in insulin resistance and inflammation in the liver, setting the scene for the development of type 2 diabetes and obesity.

In summary eating 5-a-Day is unlikely to protect you from cancer. Choose green, leafy or cruciferous vegetables, over sweet fruits, for their superior nutrition with little to no sugar. Remember that a low-sugar diet can help prevent obesity and diabetes, which incidentally, are two of the biggest modifiable risk factors for developing cancer.

This article was published in print and online in The Star Kenya on 13th January 2020.