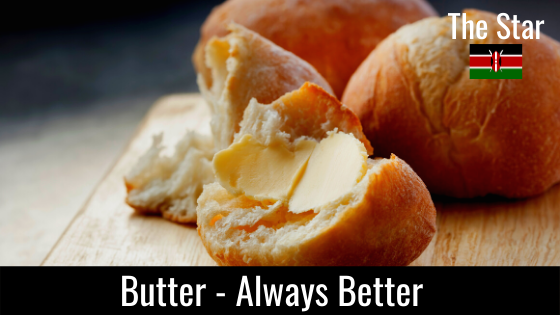 A few weeks ago, I wrote about the garbage that is margarine. Many readers got in touch with me concerned that I did not provide an alternative. They know that I’m a fervent anti-sugar campaigner, so jam and honey were out of the question.

The truth, I was told, was that bread and margarine were married – metaphorically anyway – yet here I was, starting divorce proceedings.

The butter versus margarine war rages on. In my mind, butter wins. Every time. Yes, it spoils easily, necessitating refrigeration. Yes, it’s a nuisance to spread when cold, often ripping your slice of bread to shreds. In this follow-up article, I submit to you that these are minor inconveniences, not deal-breakers.

Butter (grass-fed butter) is delicious and natural. It is high in vitamin A and contains the other fat-soluble vitamins, D, E, and K, as well as other important micronutrients and healthy omega 3 fatty acids. Butter is made by churning the fatty portion of cow’s milk. Salt is occasionally added, and sometimes cream to make it spread easier.

Fatty meats, lard, butter, cream, coconut oil, palm oil, and dark chocolate are some examples of foods that are rich in saturated fat.

I’ve previously discussed the shameful series of events that led to the demonisation of natural fat. Since 1956, we’ve been advised to avoid a diet high in butter, lard, eggs and fatty meat. This information was misguided and illogical. These foods (butter being the exception) all have more unsaturated than saturated fat. Fish contains lots of saturated fat, yet fish consumption is inversely correlated with heart disease. The more fish one eats, the lower their risk of heart disease.

Here’s the truth. All natural fats contain saturated, mono-unsaturated and poly-unsaturated fat in varying proportions. This means that you cannot eat saturated fat without eating unsaturated fat. No food exists that contains only saturated fat. This message seems to have been lost in translation by the anti-fat brigaders. Olive oil contains seven times the saturated fat of a typical serving of beef. Why does olive oil escape the wrath that befalls beef or eggs?

The Problem with Observational Evidence

Within the low-cholesterol low-fat campaign lies opportunity. Food manufacturers can produce unnatural butter substitutes (margarine), riding on the back of these health claims endorsed by governments. We now know that there has never been any scientific evidence implicating natural saturated fat in causing heart disease. Neither natural saturated fat nor cholesterol has ever been proven to cause harm. The associations that were found were not causal – they could not prove this claim.

Major governments have finally admitted that they were wrong about cholesterol. Dietary cholesterol is no longer blacklisted. But saturated fat still is. Let me draw your attention to the fact that only animal-based foods contain cholesterol. Early and more recent studies test the cholesterol hypothesis by observing what health outcomes ensue in participants who eat animal foods like beef.

If they managed to conclude, as they did, that dietary cholesterol played no part in heart disease, then how could they also conclude that the saturated fat that’s also contained within the beef was to blame? How exactly could they have untangled one from the other if they are both present in the beef?

Dietary Cholesterol is not associated with disease.

Choose butter. It is delicious, natural, minimally processed and not proven to cause heart disease. And remember that we cannot and should not blame an ancient food for a modern disease.

This article was published online and in print in The Star Kenya on 18th November 2019.