The Weight of our Nation 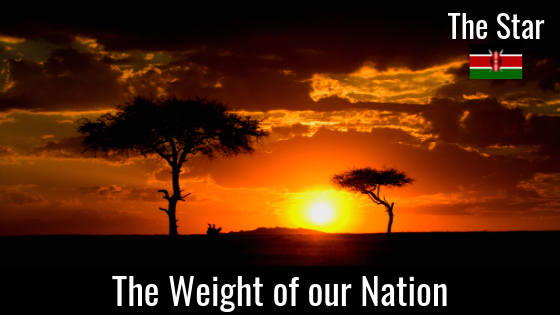 In 2010, humanity passed an important milestone. Obesity became a bigger public health problem than hunger. One hungry child is still one too many. Eradicating hunger remains a priority. But the rising rates of obesity and diabetes can no longer be ignored.

A recent review by the Ministry of Health in Kenya has acknowledged the dramatic increase in obesity, particularly among Kenyan women and children. According to the review, the latest data from all over the country showed alarming rates of outpatient cases with high blood pressure and diabetes, related to being over-weight. The Ministry says diseases such as cancers, heart disease, and type 2 diabetes represent up to 70 percent of all hospital admissions and up to half of all inpatient deaths.

Weight – Over and Under

Our children have not been spared either. We now have a double burden of malnutrition – where high numbers of undernourished children co-exist with increasing numbers of overweight children.

My parents’ generation grew up in times of food insecurity. Food was not nearly as plentiful or as readily available as it is now. Convenience foods were largely unheard of. Almost everything they ate came from the farm, with the exception of staples such as flour, sugar, rice and cooking fat.

As our food environment changed, so did our waistlines. We have never been fatter or sicker.

As their fortunes changed, so did their bodies. Many moved to and settled in the cities. More money meant more choices. Protruding bellies and rounded cheeks were a symbol of prosperity. Apart from being taught that too much sugar would rot my teeth, there was never any other connection made between food and health – or disease for that matter.

No one contests the negative influence of cigarette smoking or excessive alcohol on health. However, the issue of what constitutes a healthy diet remains highly disputed. Many Kenyans believe that eating fatty meat contributes to disease. Many more assume fruit intake, and lots of it, is a healthy practice, even for diabetics.

Little kiosks are dotted all over towns and villages in Kenya, selling manufactured food products, such as bread, scones, chapati, mandazi, chips, and of course, sodas. Coca-colonisation is visually evident, everywhere. In the bigger cities, urbanization has led to increased uptake of processed foods, and a move away from diets rich in fiber and vegetables.

The Nairobi I grew up in in the 80s is now largely unrecognisable. Pizza deliveries are commonplace. Supermarkets are overflowing with processed food. Petrol stations, having once sold fuel and newspapers, have been turned into cafes and fast-food restaurants. The portion sizes are huge, even by ‘western’ standards. As this 24-hour eating extravaganza descends onto our major cities, profits continue to soar with each expanding waistline.

A glass of pineapple juice can have as much sugar as a glass of soda. Are people aware of this? If not, why not?

Juicing has recently gained wide popularity, as a weight-conscious generation seek healthier alternatives to soda. The juicing process squeezes out most of the moisture, leaving behind the seeds, skin, and membranes – where most of the fibre and nutrients exist. This results in a concentrated sugary solution, devoid of many nutrients, and the protective effect of fibre.

This is what we know for sure. A poor diet the single biggest contributor to poor health. Nothing else comes close. Not exercise. Not even smoking. Giving other factors equal emphasis is not a sensible strategy. Nutrition policies in the U.K. and U.S. (that were established over 40 years ago) were never based on good quality evidence. These guidelines were, over time, incorporated by middle and low-income countries. The demonization of fat birthed a low-fat campaign, that led to the expansion of refined grains and sugar. Natural fat was substituted for industrially manufactured fats and oils.

The Weight of our Nation

Diabetes, heart disease and cancer are crippling healthcare systems all over the world. Kenya cannot afford to have a diabetes epidemic. This is a disease that will almost certainly bankrupt nations, in my lifetime. Yet, every survey tells us that this tsunami of metabolic disease is gaining momentum, at a time when the quality of and access to public healthcare remains inadequate.

It is estimated that one in 20 Kenyans has diabetes. There must be something in our environment that explains the rise and rise of this diabesity epidemic. Once a disease associated with the affluent, it is now common among the low-income segment of the population. The situation is so dire, that a state of emergency should be declared. Our young, booming economy is at risk of losing a generation to entirely avoidable diseases. We need to pay attention to what we are advising the general population to eat, as a matter of urgency. This will involve a critical review of the current guidelines and a radical reconstruction of our food environment.

‘Big Food’ is profiteering at the expense of our weight and health, and that of our children.

We need our leaders to work with public health experts to analyse the economic, environmental and societal impact that fast food has had on wealthier economies. We need to recognise that these multinational corporations are beginning to dominate emerging economies. We have witnessed the disappearance of eateries offering traditional foods, as a consequence of rising rents brought about by competitors who flex huge financial muscles. We owe it to our citizens to observe the destruction they have left in their wake, and, for once, to prioritise the health of our nation, over profit.

‘Big Food’ is profiteering at the expense of our health, and that of our children. We must try to disincentivise consumers from buying highly processed foods. This would require government involvement generally, and regulation of the food industry specifically.

A socio-cultural shift is also necessary. A potbelly is neither attractive nor a sign of prosperity. Protruding bellies may once have been considered acceptable – a badge of honour. This sentiment still exists in many African communities. The truth is that large waistlines are a sign of dis-ease. There is nothing benign, privileged or admirable about a potbelly. The fact is that beneath that belly lies a ticking time bomb of diabetes and heart disease.

Everyone, from producers to regulators to consumers, must accept some responsibility in trying to stem the tsunami of diabesity that we’re facing. If not for our sake, then for the sake of our children. The weight of our nation has landed squarely on our shoulders, and it’s time to start a conversation.

This article was published online and in print, in The Star Kenya, on 21st July 2019.