CANCER | The Risk Factors that Matter the Most – Part 3 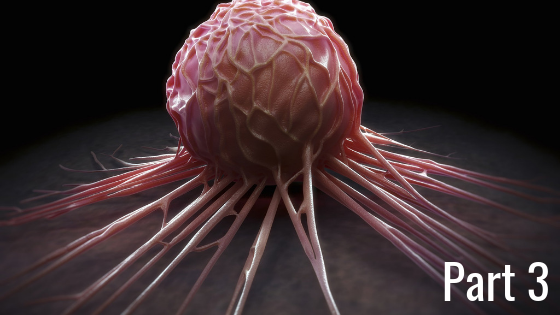 As discussed in Part 2, cancer may well be a metabolic disease. But unlike type 2 diabetes, it is not simply a dietary disease. It is now quite clear that the majority of cancers are not caused by ‘genetic mistakes’.

Scientists accept that only a small percentage of cancers can be linked to ‘genetic risk’. Environmental risk factors account for the vast majority of cancer cases. Scientists have known this for decades, and recent studies, such as this one, confirm that the environment is, indeed, the most important risk factor, not genetics.

A risk factor (in the current context) is a variable associated with an increased risk of disease or infection. 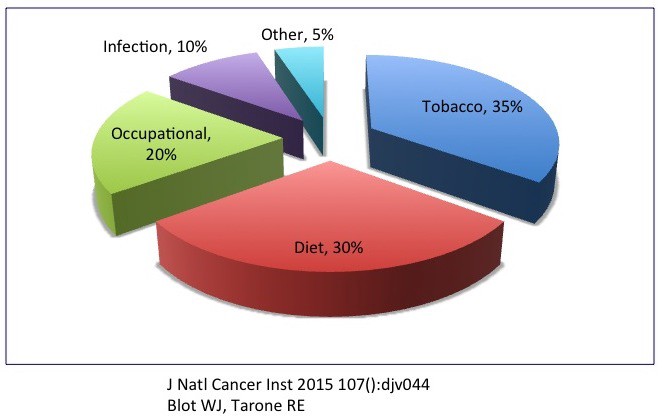 In order of importance, here are the risk factors related to cancer.

The WHO categorises carcinogens as follows.

The chart above clearly shows that the vast majority of cancers are preventable and avoidable. Genetic cases only account for a tiny minority. To win a war, one must first understand the enemy. In this case, we understand that we need to be focusing most of our energy and resources into preventing cancer from happening in the first place. If cancer is to be understood as a mitochondrial metabolic disease, something in our environment (apart from advancing age) is damaging our mitochondria. We need to put our investigative hats on, and discover what that ‘it’ is. The list above is a good place to start.

No other intervention, including screening, genetic research, targeted pharmacotherapies, chemotherapy or radiotherapy, is as important as prevention. There is no doubt or dispute, that prevention is easier, smarter and cheaper than cure.

Our efforts to get rid of cancer revolve around trying to kill it. We poison it with chemotherapy – which also poisons healthy cells. If the chemo does not kill you, it will soon lose its effectiveness. We blast it with radiotherapy – to damage its DNA and slow down its growth, but it will soon recur. We surgically remove whole lumps of cancer, or entire organs, such as a cancerous kidney – knowing all too well that those with metastatic spread will do poorly, in spite of the extent of the surgery.

What’s worse is that our diagnostic techniques may be inadvertently promoting cancer growth and spread. From the first X-Ray, to the CT scans, to the biopsies we take. All the active and supportive treatments around cancer can also increase one’s risk of developing another type of cancer. Biopsies are done because cancer is considered a pathological diagnosis, and while scans can suggest the disease, it needs to be ‘seen’ under a microscope; from which a barrage of genetic testing follows.

None of this fills me with confidence. Clinicians are lucky if these anti-growth measures kill the cancer before it kills the patient.

Biopsies are not a benign procedure. Cancer cells are much easier to dislodge than normal cells. Several case studies that have shown that after diagnostic biopsy of a tumour, many patients developed cancer at multiple sites. This is known as ‘seeding’ of the cancer cells. In this review, 94% of breast cancers and 4% liver malignancies showed a risk of seeding of cancer cells following biopsy or FNAC (fine needle aspiration cytology). Considering that more than 90% of cancer-associated mortality (death) is attributed to metastasis, cancer seeding can have fatal consequences.

Why does cancer survive everything we throw at it? Could it be that the SMT theory is wrong? Has cancer research been barking up the wrong tree for decades? Almost every known cell type in the body (breast, lung, colon, prostate) can become cancerous. We’ve observed different mutations even within the same cancer. We also observe lots of mutations in cells, but no cancer. It is estimated that you could alter 4% of the genome and still have a cell that looked and behaved completely normally. Why are these genes mutating in the first place? What determines if the mutation becomes cancerous? And most importantly, what is damaging the mitochondria? It seems sensible to go back to first principles and explore the why. Why cancer develops.

We need to keep asking ‘why’ until we get to the common denominator of this beast.

This brings me back to acknowledging cancer as a metabolic disease. Cancer cells exhibit a strong pressure to grow. For a cell to grow, it must have a steady supply of nutrients. So, what if we cut off the fuel supply? Is it possible to starve cancer to death?

We’ve seen that cancer cells love glucose. They take it up from the bloodstream at a very rapid rate. But glucose is just one part of this story. Let me introduce another of cancers’ favourite ‘foods’ – Glutamine. Glutamine is an amino acid that is used to synthesise (make) protein. It is one of the most abundant amino acids in the blood and is an important component of the immune system. Cancer cells can and do utilise glutamine for energy creation. In fact, some cancer cells appear to be absolutely dependent on glutamine for growth and replication.

Glucose and glutamine are the most abundant fermentable fuels present in the circulation. Together, they drive the uncontrollable growth of cancers.

Can we stop eating glucose? Yes. Does the body require us to consume glucose to survive and thrive? Absolutely not. As discussed in this article, our diets must contain essential fatty acids, such as omega 3. It must also contain essential amino acids. These acids cannot be synthesised (made) by the body and must be consumed in the diet, to maintain optimal health.

There are no essential sugars or starches (carbohydrates). None. Your body and brain do require some sugar (glucose) to function, but they do not need you to eat any carbs to function. They can produce as much sugar as they need, from scratch. This is known as gluconeogenesis. There is, therefore, no absolute requirement to consume carbohydrates. Gluconeogenesis is a process by which glucose is created from a non-carbohydrate substrate, such as fat (glycerol) or protein (amino acids).

An ideal diet for cancer sufferers should be one that keeps both blood sugar and insulin low. The ketogenic diet does just this, with only 5-10% of calories coming from carbohydrates. Insulin is an anabolic (growth) hormone which is primarily responsible for energy distribution in the body. Many cancer cells over-express insulin and IGF-1 (insulin-like growth factor 1) receptors. High levels of insulin signals (tells) the cancer cells to grow and divide. We also know that low levels of insulin render cancer cells more likely to be damaged or killed by chemo/radiotherapy.

Of the three food groups (macronutrients), carbohydrates stimulate insulin release the most and fat the least. Protein also stimulates insulin release, and this is greatly exaggerated in the presence of carbohydrates, such as would happen when eating a beef burger with a bun and chips. However, in the absence of carbohydrates, protein only has a moderate impact on insulin. Therefore, a low carb, moderate protein, high healthy fat diet appears to be the ideal diet.

Persistently high insulin levels cause insulin resistance, a situation in which the cells no longer respond appropriately to insulin, and therefore fail to lower the blood glucose. This happens as a result of years of bombardment of cells by higher and higher levels of glucose, and insulin. This is entirely related to excessive carbs in the diet. 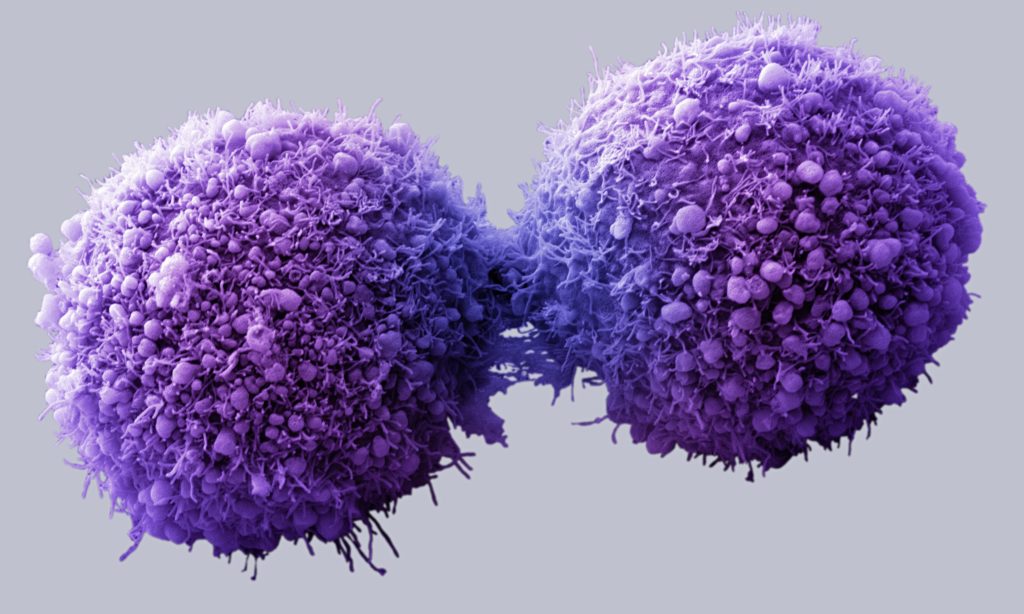 Insulin resistance drives type 2 diabetes, obesity and heart disease. It also drives cancer. Many cancers are associated with obesity and the rates of these cancers are increasing rapidly. The prevalence of overweight and obesity is increasing worldwide, in tandem with rising rates of cancer. Recent research has found that as the BMI (Body Mass Index) increases by 5 kg/m2, cancer mortality increases by 10%. As an example, weight gain of only 5kg (11 pounds) increased the risk of breast cancer by 11%.

The weight-cancer association is particularly strong with colorectal cancer, oesophageal cancer, pancreatic cancer, and endometrial cancer.  Numerous other studies have shown a link between obesity and cancer incidence overall.

The Ketogenic Diet and Cancer

Eating a very low carbohydrate or ketogenic diet is healthy and advisable for those seeking to lose weight and reverse metabolic diseases, like type 2 diabetes. I have never observed any other drug or dietary intervention render diabetes into remission as quickly and as safely as the ketogenic diet. If cancer is to be understood as a metabolic disease, and metabolic diseases have insulin resistance as their common theme, then we must, all, be reducing the amount of carbohydrates in our diets, particularly the sugars and highly refined grains and starches.

A ketogenic diet results in fatty acid oxidation (burning fat) which creates ketones, an alternative fuel source for the body. Restricting glucose and glutamine availability create ‘metabolic stress’. Unlike glucose, ketone bodies cannot ferment. Normal cells have the metabolic flexibility to use ketones as an efficient energy source. Cancer cells do not have this flexibility, and this is an added stressor.

Cancer cells are intrinsically vulnerable to metabolic stress due to mitochondrial damage and genetic mutations. This, in part, explains why radiotherapy has been shown to be more effective when ketone bodies are high. The most exciting studies relate to the treatment of GBM (Glio-Blastoma Multiformae), the most aggressive type of brain cancer. Pre-clinical research suggests that nutritional ketosis increases the effect of both radiation and chemotherapy, and can enhance the anti-tumour immune response.

While a ketogenic diet may help, lowering carbs (and therefore the glucose supply) alone, is not enough to stop this beast in its tracks.

Glutamine is more difficult to eliminate from our diet, as it is found in many foods. It is also a conditional amino acid, which means that while your body naturally produces it, it must be obtained from the diet under certain conditions, such as major injury, burns or illness. Glutamine is a necessary component of proteins. Therefore, virtually any food containing protein will contain glutamine. The largest amounts are found in animal products, such as eggs and beef, due to their high protein content.

Restricting glutamine availability would, therefore, require a fasting approach, or a pharmaceutical approach.

In Part 4, I conclude this Cancer Series by discussing a number of ways we can starve this beast. I also give my take on what we can all do to avoid and prevent cancer.