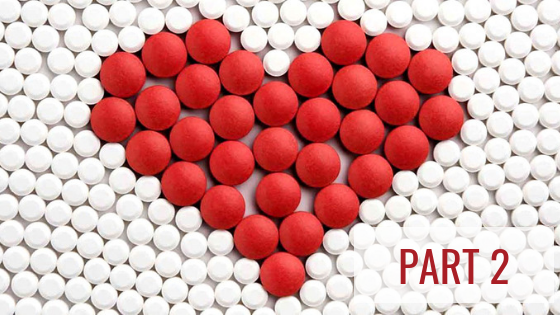 Part 2 of this series on heart health, describes the clinical consequences of focusing obsessively on LDL, and why the current dietary guidelines are not fit for purpose.

In 2013, the American College of Cardiologists moved away from using a single cholesterol marker, to using calculators to assess cardiovascular risk. These use lists of conventional risk factors to ‘calculate’ your risk of a cardiovascular event, such as a heart attack, over the next 5 to 10 years. The QRISK is a UK-developed risk calculator. Others, like the ASCVD, are commonly used in the US. The results are then used to determine if a patient needs to be started on a statin (a cholesterol-lowering pill).

By simply changing the goalpost from a single cholesterol number to a very low percentage risk profile, the number of Americans being prescribed statins increased by 12.5 million. This just happened to represent mainly elderly people, without a history of heart disease. It is worth noting that statins are cautioned in the elderly (over 70 years). Therefore, this was the population least likely to benefit from statins.

This is important because, including age and gender in the calculator, irrespective of the other risk factors, vastly exaggerates the actual risk. This means that no matter how healthy you are, and irrespective of the irrefutable evidence that the higher the cholesterol, the lower the death rates, you end up statinated.

Zoe Harcombe, an obesity researcher and author of The Obesity Epidemic, studied WHO data for almost 200 countries. Her research, in 2010, investigated the relationship between cholesterol and death from all causes. She discovered that cholesterol levels and deaths from cardiovascular disease, or from any cause were inversely related for men and women. This means that the higher the cholesterol level, the lower the death rates and vice versa. Such a significant association should prompt a proper high-quality study, to prove causation, but this has never been done.

Kaiser Permanente published this study in the Journal of the American College of Cardiology. The widely recommended ACC/AHA Pooled Cohort Tool (calculator) was found to substantially overestimate the actual 5-year risk in adults overall, by as much a five to six-fold. The actual incidence of cardiovascular events was much lower than the predicted risks.

Several other studies have reached similar, or even worse conclusions, on the over-estimation of risk, such as this one looking at the ASCVD Risk Score.

Based on the QRISK tool, this study, which made headlines in UK newspapers, published the following results “Even with optimal risk factor levels, males of different ethnicities would exceed the 10% risk threshold between the ages of 60 and 70 years and females would exceed the threshold between 65 and 75 years. Under the NICE guidelines, 11.8 million males and females (37% of the adults aged 30–84 years) would require statin therapy, most of them (9.8 million) for primary prevention’’.

The authors concluded that pretty much all adults should be on statins. “Under the 2014 NICE guidelines, 11.8 million (37%) adults in England aged 30–84 years, including almost all males >60 years in all females >75 years, require statin therapy.”

Within the cholesterol war lies the supervillain, LDL cholesterol. HDL and LDL are lipoproteins – transport mechanisms that carry triglycerides and cholesterol to parts of the body that need them. Lipoproteins contain cholesterol, triglycerides, amino acids (such as Co-enzyme Q10), fat-soluble vitamins (such as Vit. A and Vit. E – a powerful antioxidant), and other structural factors.

There is no such thing as good or bad cholesterol. Cholesterol just is.

Simply put, LDL carries ‘fresh’ cholesterol to cells and HDL scavenges ‘old’ cholesterol back to the liver for recycling. We know that water and fat don’t mix. Lipoproteins exist to distribute these fat-soluble nutrients in the blood – a water-based system. This is their primary role. Cholesterol, therefore, is not good or bad. It just is. There is only one type of cholesterol, but there are different types of lipoproteins. Lipoproteins are also involved in the repair of damaged blood vessel walls.

When your doctor orders cholesterol tests, this is what happens. Total cholesterol, TG, and HDL are measured. LDL is calculated (estimated). The ratios of these lipids tell us about our metabolic health. For instance, it is widely accepted that the TG: HDL ratio is the most exquisite measurement of metabolic health; with a ratio of < 2.0 being the target.

LDL is only one piece of the Puzzle

There is an over-emphasis on LDL being the primary marker of heart health. This is an oversimplification and reflects a lack of understanding of lipid homeostasis. The lipid system is incredibly dynamic. There appears to be a distinct level of lipids that the body regulates towards.

This is a simplified illustration of the LDL particle (LDL-p). Remember that LDL’s job is to transport triglycerides (stored energy) to the tissues that require it.

It is not the LDL in the bloodstream that is causing a problem, it is the LDL inside the walls of the blood vessel that causes a problem. I describe the confusion surrounding LDL, in detail, in this article.

The primary reason LDL-cholesterol correlates with cardiovascular disease is because it is more easily oxidized.

LDLs are a major carrier of circulating cholesterol. They are very susceptible to oxidation of the embedded apoB100 protein. When cholesterol becomes oxidised, it becomes toxic to the body. Oxidized cholesterol directly damages the blood vessels and serves as a marker of oxidative stress.

Cholesterol is used as a raw material for the healing process when an injury is detected in the body. When cholesterol was observed within the plaque that blocks arteries causing heart attacks, it was assumed to be responsible for causing heart disease. This is as ignorant as blaming the fireman for causing a fire. The cholesterol is there to help. To repair. It did not cause the injury in the first place. We’ve confused effect with cause.

In my article on cholesterol and eggs, I explained that, in most people, cholesterol-rich foods have very little impact on blood cholesterol levels. If our intake goes up, our body makes less cholesterol – and vice versa.

However, there are always exceptions. In some people, high cholesterol foods do cause a rise in blood cholesterol. These individuals are known as ‘hyper-responders’ and they have a genetic variant. Importantly, despite dietary cholesterol causing a moderate increase in LDL in this population, it does not seem to increase their risk of heart disease. This is because the general increase in LDL particles typically reflects an increase in large, buoyant LDL particles, not small, dense LDL. People who have mainly large LDL particles actually have a lower risk of heart disease.

Hyper-responders also demonstrate an increase in HDL particles, which offsets the increase in LDL by transporting excess cholesterol back to the liver. Therefore, when they increase their dietary cholesterol, the ratio of LDL to HDL cholesterol in these individuals stays the same and their risk of heart disease doesn’t seem to go up.

LDL is not enough

This study looked at a large cohort of patients hospitalized with CAD. Before admission, only 20% of participants were receiving cholesterol-lowering medications. Almost half of all the participants had admission LDL levels less than 100 mg/dL (2.6mmol/L). Note that normal LDL levels should be less than 3mmol/L. Something seems off here. If 50% of these patients who were admitted with a heart attack had normal LDL levels, at least 2 conclusions can be drawn.

To add insult to injury, cigarette smoking, a huge risk factor, does not increase LDL levels. Neither does diabetes, abdominal obesity, inflammation or insulin resistance! These are the biggest risk factors for heart disease. It is embarrassingly clear that this story is not just about LDL.

The LDL obsession becomes an issue in clinical practice. A patient with abdominal obesity goes to see his doctor. His blood pressure and blood sugar readings are normal. His LDL is also ‘normal’. This patient is then deemed heart healthy – because the LDL reading is within the accepted range. You can now see how this myopic, rigid view of heart health can lead to missed opportunities in addressing the other glaringly obvious risk factors.

Waist circumference reflects insulin resistance. In fact, the waist to height ratio correlates perfectly with insulin sensitivity. The larger your waist, the more insulin resistant you are. Insulin resistance is undoubtedly the hallmark of the metabolic syndrome – a cluster of risk factors that increase your risk of developing heart disease, strokes, diabetes, and other metabolic diseases.

Inflammation, oxidative stress, abnormal clotting, and advanced glycation play a significant role in the development of heart disease. Cholesterol is just one piece of the puzzle. It is understood that in hyperglycaemic (high blood sugar) states, LDL changes its shape and becomes stickier, and much more likely to adhere to damaged arteries. The solution, however, is not to statinate everyone, but to address the underlying issues that are causing all the trouble in the first place – and in this example, it stands to reason that aggressive blood sugar control, by changing the diet, should be the presiding focus.

Dietary Guidelines | No Evidence Base

The diet I refer to is certainly not the one that is based on the current dietary recommendations.  The advice is that at least 55% of daily energy intake should come from a variety of carbohydrate sources: cereals, sugars, fruits, vegetables, and legumes. The NHS ‘eat-well plate’ is illustrated below.

What they don’t, or choose not to understand, is that Type 2 diabetics are carbohydrate intolerant. Advising them to eat a starch and grain-based diet with plenty of fruit is foolish. Diabetes is a consequence of insulin resistance, and therefore, a high carbohydrate diet – which will stimulate more and more insulin production, is downright deadly. More insulin simply causes more insulin resistance. Chasing the predictable rises in blood glucose with more insulin is exactly the wrong approach. Removing the carbohydrates from a diabetic’s diet has been shown to significantly improve their disease, including achieving remission.

In any case, our dietary guidelines are not based on any good quality evidence whatsoever, as discovered by Dr. Zoe Harcombe, a leading UK based obesity researcher, in this publication. The famous, recently published PURE Study also concluded that higher carbohydrate diets (>55% carbs) are associated with an increased risk of mortality. This nationally recommended diet has adverse effects on all risk markers, except LDL.

The take-home point is that we should be focusing on adverse events, not on LDL. LDL alone does not capture the net clinical effects of nutrients on CVD risk. This global study also showed that there was a tendency to a reduced risk of mortality associated with natural saturated fats. This further refutes the current recommendations to consume < 10% saturated fat (of our < 30% ‘allowed’ total fat quota).

Continue to Part 3 of this series on heart health, where I describe how the fear of cholesterol has been propagated and capitalized by drug manufacturers.