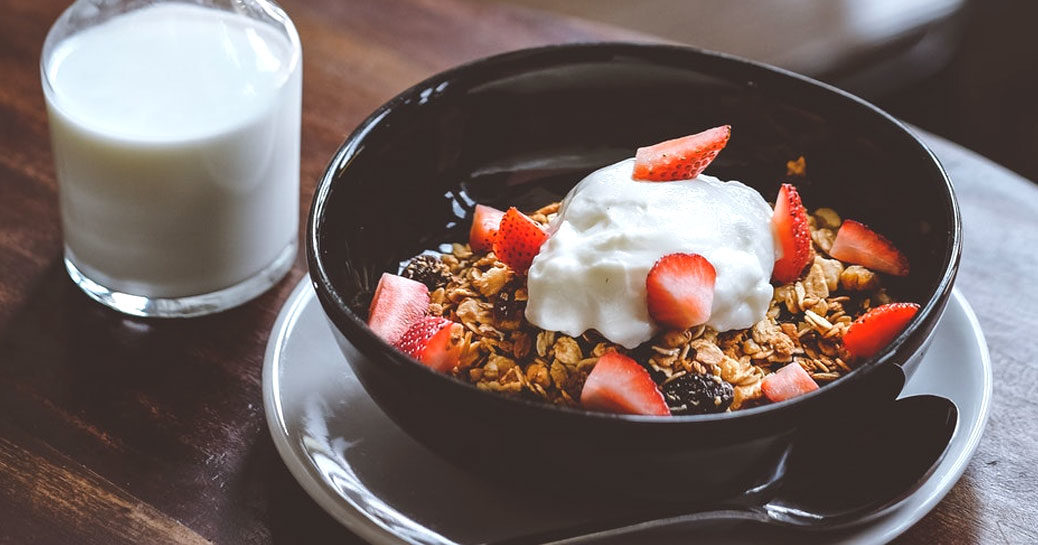 Popular breakfast cereals have had some bad press over the last few years. And rightly so. While they may be considered a convenient meal on a rushed morning, the amount of sugar in brands like Cornflakes, Cheerios and Frosties is shocking. With the worst offender containing as much as 3 teaspoons of sugar per serving, are these products really any different to a dessert?

But is this the whole picture? Do we really eat just a serving – 30g (grams)? Are they referring to the added sugar or the total sugar? And what is the difference between sugar and carbohydrate? The word ‘sugar’ causes a lot of confusion. We talk about table sugar and blood sugar. ‘Healthy’ sugar and fruit sugar. What exactly is Sugar?

4g of sugar is equal to one teaspoonful.

Starch, the form in which plants store energy, such as potatoes and grains, consists of thousands of glucose molecules. Fibre is a form of carbohydrate. The term ‘fibre’ represents indigestible polysaccharides that cannot be broken down by human enzymes.

Sugar (simple carbohydrates) | Inside and Out

Back to the offending breakfast cereals. Let’s take Frosted Flakes (Frosties) which are sugar-coated cornflakes. According to the Nutrition Information found on the side of the box, shown below, a 30g serving contains 26g of carbohydrate (of which 11g is sugar). 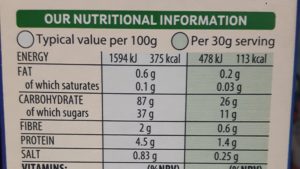 4g of sugar is equal to one teaspoon (4.2g to be exact). So that’s where the 3 teaspoons per serving comes from. So far so good. But what of the rest of the carbohydrate? It is mostly grain – maize and barley. They also mention a fibre content of 0.6g. When we eat carbohydrates, the body (digestive system) must break them down into simple sugars (monosaccharides), the form in which they can be absorbed. Therefore, all digestible carbohydrates are or will be broken down into simple sugars (glucose, fructose, galactose).

Now take the 26 grams of Carbohydrate. Your body will break it all down to glucose and fructose (simple sugars). Even allowing for the 0.6g of fibre, this still adds up to 6 teaspoons of sugar (26-0.6/4.2). That’s double what is written, and that assumes we eat just 30g. We know we eat a lot more than that. A standard bowlful is probably closer to 100g (or 20 teaspoons of sugar!)

“If you eat a bowl of corn flakes without the sugar or a bowl of sugar without the corn flakes, below the neck, they are the same thing. Your metabolism can’t tell the difference”. Harvard Professor David Ludwig, MD, Ph.D.

Perhaps you prefer Shreddies. A 40g serving contains 34g of carbohydrates (12g of which is added sugar). That’s about 7 teaspoons of sugar, following digestion. These cereals (pre-fortification) do contain fibre and some vitamins and minerals, but not nearly as much as we think. Do not be sidetracked by the added micronutrients, the sugar is still the issue.

The NHS advises adults not to exceed more than 30g (7 teaspoons) of added sugars a day. That tiny bowl of Shreddies packs in almost half of your ‘recommended’ intake of added sugar. Newer WHO (World Health Organisation) conditional guidelines go a little further, recommending less than 6 teaspoons a day, but our consumption of sugar still remains staggeringly high.

Kellogg’s and Nestle | What Say You?

Kellogg’s UK has recently been under fire for allegedly attempting to circumvent child sugar rules after branding Frosties, which features a cartoon tiger, as an adult cereal. According to Kellogg’s, “Frosties will no longer feature any children’s on-pack promotions in recognition that the cereal tends to be eaten by more adults than children”. On the upside, Nestle and Kellogg’s, two of the biggest breakfast cereal manufacturers, have announced that they are committed to reducing sugar in their cereals. Kellogg’s said they will have removed “2,000 tonnes of sugar by the end of 2018.” 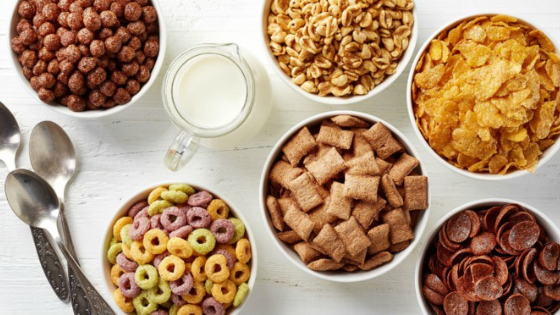 This is Dessert. Not Breakfast | INSULEAN

Added sugar has no nutritional benefit whatsoever. None. The body does not require any energy from added sugar. But I would not refer to sugar as ‘empty’ calories. That implies that consuming it does not make a difference, good or bad, which could not be further from the truth. Excessive consumption of sugar IS the primary culprit in explaining the current crises of metabolic disease and tooth decay that we now face. That’s the opposite of empty.

‘Food’ is defined as any nutritious substance that people or animals eat or drink or that plants absorb in order to maintain life and growth.

Sugar has no nutritional benefit. So how can it be considered a food. In addition, if it is not a food, why are we given guidelines on ‘recommended intake’?